Council of Europe calls for executive reforms in Ireland 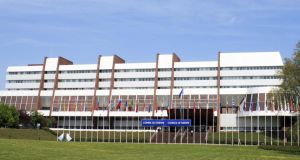 The Council of Europe building in Strasbourg. A council group, Greco, noted “with concern” in their report that the disclosure of confidential communication can lead to up to six months in prison in Ireland

The Council of Europe has called for a radical reform of Ireland’s parliamentary system in order to prevent corruption and misconduct by members of the Houses of the Oireachtas.

In a wide-ranging review of Ireland’s parliamentary, judicial and prosecution system to be published today, the Strasbourg-based body notes that there is “growing concern” about corruption in Ireland, despite recent reforms such as the Freedom of Information Act and Ethics Acts.

Among the 11 specific recommendations proposed by the body is a call for TDs to be given regular training on ethics, conflict of interest and corruption-prevention issues. It also notes “with concern” that the disclosure of confidential communication can lead to up to six months in prison in Ireland.

While the report praises the transparency of Ireland’s parliamentary system, it sharply criticises the current system that governs the conduct of parliamentarians, noting that it comprises rules that are drawn from a variety of sources including the Constitution, legislation and various codes of conduct.

While the 48-page report is broadly positive about the Irish judicial and prosecution service, it makes a number of recommendations regarding the judiciary. It calls for a judicial council to be established to enhance appointment procedures, and to establish an ethical code for judges.

It also says that the system of selecting, recruiting and promoting judges needs to be reviewed, though it adds that “the independence and professionalism of judges is undisputed.”

The report, titled Corruption Prevention in Respect of Members of Parliament, Judges and Prosecutors, was prepared by the Council of Europe’s Group of States against Corruption (Greco) group which monitors anti-corruption laws and practices in 47 Council of Europe member states, as well as the US and Belarus.