Cold war chill as leaders clash over Ukraine in Munich

While Merkel has faith in sanctions, others see arms as more persuasive 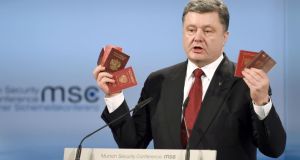 Ukraine’s Petro Poroshenko holds up Russian passports as proof that Russian troops are present in the conflict at talks in Munich at the weekend. Photograph: Tobias Hase

It was -3 degrees in Munich over the weekend and, inside the 51st Security Conference, there was an unmistakable cold war chill.

For three days the Bayerischer Hof hotel was a security and diplomatic lockdown as western leaders clashed with Russian counterparts over the way into – and out of – the Ukraine crisis. Delegates arrived in glum agreement over the risks posed by the conflict, and departed after heated disagreements over whether military might or diplomatic skill could save the day.

Angela Merkel looked shattered when she arrived on Saturday morning from Moscow after late-night talks with President Vladimir Putin. The chancellor is known for her caution, never leaping unless she has looked at where she is likely to land. That she still flew to Moscow for a diplomatic push, outcome unknown, was an indication of her key stature in the Ukraine stand-off – and the deteriorating situation.

Merkel told Munich delegates her talks with Putin had only confirmed her conviction that delivering weapons to Ukraine would not help an already fraught situation. While one half of the hall applauded her, the other half went on the attack. After Senator John McCain attacked Merkel’s Moscow mission as “appeasement politics” – an accusation with grave historical overtones in Munich – Senator Lindsey Graham accused her of “abandoning a struggling democracy”.

Former British foreign secretary Malcolm Rifkind chastised Merkel with Frederick the Great’s remark that “diplomacy without weapons is like music without notes”.

Though the tone varied, the question remained the same: what is Berlin’s back-up plan with Moscow if diplomacy doesn’t work? Merkel said her reticence on supplying arms to Kiev was not just informed by elusive engagement with Putin, but by her own background. As someone who grew up in East Germany, she said she understood in hindsight the West’s decision not to intervene militarily in 1961 when East Germany erected the Berlin Wall. “I don’t blame anyone for their realistic assessment at the time that it would not be successful,” she said. “Today I cannot imagine a situation in which improved arming of the Ukrainian army impresses Putin so much that he thinks he will lose.”

After talks in Munich with Merkel, Ukrainian president Petro Poroshenko made no effort to hide his disagreement. To bolster his case for defence assistance, and counter Russian delegates’ denial of Moscow involvement in eastern Ukraine, Poroschenko produced passports and ID cards he said were confiscated from Russian soldiers who claimed to have “lost their way, 100km from the border”. Ukraine had a right to defend itself, he said, and would not use “weapons to kill people but to make our defence more efficient”.

Next to him, Lithuanian president Dalia Grybauskaite urged western leaders to use “all means necessary” to support Kiev. Speaking in unison, the Lithuanian and Ukrainian leaders underlined their trust in the German chancellor but said they drew a very different lesson from their formative ostblock years. With an eye on Baltic history and geography, Grybauskaite said betraying Ukraine would be a betrayal of the Baltic region’s self-interest. “After Ukraine,” she said, “we will be next.”

“We all invested in a type of Russia we hoped and still hope will emerge one day. Unfortunately Mr Putin has chosen a different path,” he said. Washington would judge the Russian leader by his actions rather than his words, he said, because “too often Mr Putin has promised peace and delivered tanks”.

While praising Merkel’s diplomatic lead in the Ukrainian crisis, Biden echoed Poroshenko, saying: “We believe the Ukrainian people have a right to defend themselves.”

By the end of the conference, Munich descended into a disheartening kaleidoscope of claim and counter-claim.

Biden’s accusation that Moscow had violated international agreements on human rights and self-determination – in particular the 1975 Helsinki agreement – were countered by Russian foreign minister Sergey Lavrov. He accused the US and EU of violating the very same agreements. Nato’s push eastward “following the US dream of being the winner of the cold war” had destabilised central Europe, he said, just as western interference, from the Maidan protests on, had violated Ukrainian sovereignty.

“Our western partners issued indulgences and pardoned Kiev forces who started revolutionary efforts,” he said, “dubbing terrorists all citizens who were not in agreement with the anti-constitutional coup d’état”.

The reality gap between Russia and the west was painfully clear when Lavrov claimed Crimea’s accession to the Russian Federation was in line with the UN charter, prompting hollow laughter in the hall. Security conference chairman Wolfgang Ischinger intervened quickly, saying: “This is no laughing matter.”

Some seven decades after the Yalta conference redrew Europe’s post-war borders, and 25 years after the cold war ended, next Wednesday’s Minsk conference may be the last chance to define what price – or line on the map – can contain the conflict with Russia over Ukraine.