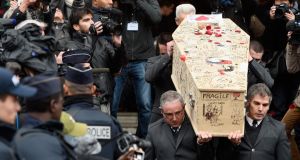 The coffin of “Tignous” is carried outside the town hall of Montreuil during the tribute service for Bernard Verlhac on January 15th, 2015 in Montreuil, France. Cartoonist Bernard “Tignous” Verlhac was killed in last week’s terrorist attack on satirical newspaper Charlie Hebdo. Photograph: Pascal Le Segretain/Getty Images

Four of the victims of the January 7th attack on the satirical weekly Charlie Hebdo were buried on Thursday.

The colleagues of slain cartoonist Berhard Verlac, known as “Tignous”, used felt pens to decorate his coffin with drawings and words of endearment at a memorial service in Tignous’s home town of Montreuil.

“You were never afraid, my Titi, and be assured, we won’t be afraid either,” said Corinne Rey, a cartoonist at Charlie Hebdo.

The gunmen who killed her colleagues forced Rey, who was with her young daughter, to enter the code at the front door to the building on January 7th. “Our magazine will live; it will be a different magazine,” Rey said.

Tignous’s widow, Chloe Verlac, thanked mourners “for continuing for us, for defending secularism”. The crowd applauded as Tignous’s coffin was carried out of the town hall.

Elsa Cayat, a psychiatrist who wrote a column, was buried at Montparnasse cemetery.

The interior minister attended the funeral in Normandy of policeman Franck Brinsolaro, who had been assigned to protect the director of Charlie Hebdo, Stéphane “Charb” Charbonnier. Charb will be buried on Friday in his home town of Pontoise.

Bernard Maris, the economist who was a shareholder in Charlie Hebdo and wrote a column for it, will be buried near Toulouse.

In happier news, it was announced Lassana Bathily, the 24-year-old Malian employee of the kosher supermarket where Amedy Coulibaly killed four Jewish men, will become a French citizen on January 20th. Mr Bathily saved the lives of several hostages by persuading them to hide in cold storage rooms in the basement.

Mr Bathily has been in France for nine years and lives in a shelter for immigrants. Some 300,000 French people signed a petition for him to be naturalised.

A woman identified as Madame Nhung, who was carried away from the supermarket siege slung over the shoulder of a gendarme, has described how Coulibaly asked a hostage “What’s your name?”

“Salomon,” the hostage replied. (Salomon is a Jewish name.) “He shot him dead immediately,” Mme Nhung recounted on France 2 television.

Speaking at the Institute of the Arab World, President François Hollande said, “Muslims are the first victims of fanaticism, fundamentalism and intolerance . . . Islam is compatible with democracy. The Muslims of France have the same rights and the same duties as all citizens.”

Khaled Aboutaleb al-Jallani, an imam at the Paris Mosque, said the problem was not that Charlie Hebdo portrayed the Prophet, but that they mocked him.

The crowd demanded that cartoonists who mock the Prophet be hanged. In Istanbul, protesters outside the opposition newspaper Cumhurriyet, which published four pages of this week’s Charlie Hebdo, shouted “this infidel newspaper must pay”.