After blooding themselves in the Middle East, French jihadists are bringing the war home 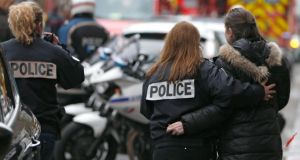 French police assist a woman after a shooting in the street of Montrouge near Paris January 8, 2015. Photograph: Reuters

It now seems clear that those suspected of responsibility for the horrific attack on the staff of the French satirical magazine Charlie Hebdo have had close links with jihadi groups in the Middle East.

Cherif Kouachi was imprisoned in 2008 for three years for his involvement in the establishment of a network to send would-be jihadi fighters to Iraq. This news has raised questions about French intelligence services’ monitoring of individuals with a known record of involvement in jihadi activity.

It also raises broader questions concerning the phenomenon of French nationals travelling to fight with violent Islamist groups in the Middle East.

The phenomenon has grown in significance over the past decade or so. In late 2004, a 19-year-old French Muslim died in a suicide attack on US troops in Baghdad. The number of French fighters in Iraq at that time was considered to be fewer than a dozen, although from an early stage there were fears that some of those involved would return home to commit further attacks in France.

Today, the number of French nationals joining jihadi groups is estimated to be in the hundreds, although it is important to note that this is a tiny minority of the overall French population of 5 million Muslims.

Last month the French newspaper Le Figaro reported on some 376 French-born fighters in Syria. Other reports cite a higher figure of 500 French nationals fighting with the Islamic State (IS), which is just one of several jihadi groups active in the region.

France also reputedly has the highest number of female recruits to jihadi groups. The French minister of the interior spoke recently of a ring active in central France that specialised in recruitment of young women to the jihadi “cause”.

Those involved are typically second- and third-generation descendants of Arab immigrants as well as converts. A common stereotype is that they are the products of a failed French model of assimilation that leads to religious radicalisation. But those who have studied French jihadi fighters in detail note that their ranks include young men and women from well-to-do families as well as recent converts.

Others look for answers in French foreign policy or in its historical involvement in the region.

In recent years, France has taken action against Islamist groups in Africa as well as the Middle East. In January 2013, France offered military support to the government of Mali when it found itself under attack from an al-Qaeda-linked group, which had taken control of much of the northern territory of the country.

Last September, France became the first country to join the US-led campaign against the IS in Iraq and subsequently conducted a series of bombing raids against IS targets.

In response, a spokesperson for IS called on its recruits and supporters to target France and its citizens. An almost immediate consequence of this was the kidnapping and subsequent murder of a French hiker in Algeria by a militant group that had declared its allegiance to IS. Before Tuesday’s events there were a number of other attacks on French soil.

France also controlled Morocco and Tunisia until the mid-1950s. The modern states of Lebanon and Syria owe their existence to the remaking of the Middle East by Britain and France in the aftermath of the first World War, and were directly controlled by France until they achieved independence in 1946.

Paris has maintained an active interest in its former territories since independence. In Algeria in 1992 the Islamist Islamic Salvation Front was poised for success in parliamentary elections. This was prevented by a military intervention which had the blessing of Paris. Years of civil war ensued in Algeria and the violence reached the streets of Paris.

France also maintained close ties with the widely hated Tunisian dictator Zine El-Abidine Ben Ali right up to his flight from the country following the popular uprising of 2011.

By contrast, the French government vigorously opposed the US attack on Iraq in 2003 from which so much of the current wave of jihadi violence has emerged. And, notwithstanding its inglorious support of Ben Ali, France was in the forefront of efforts to remove Muammar Gadafy from office in neighbouring Libya in 2011 – an effort welcomed by many, Islamists and otherwise.

The targeting of journalists working for a satirical magazine with a recent history of publishing material deemed offensive by some Muslims (and, indeed, others) may be seen as more than a violent response to French foreign policy. It is also an attack on specifically French traditions of secularity as well as broader European traditions of free speech and freedom of expression.

How to defend those freedoms without undermining them is a challenge that will face European governments for some time to come.