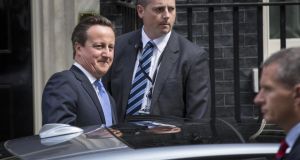 Dr Merkel, with her Dutch counterpart, Mark Rutte, separately telephoned Mr Cameron, but accepted his position would not change when the issue is discussed by EU leaders on Friday.

Seeking to emphasise the positive, number 10 last night said both Dr Merkel and Mr Rutte had underlined their support for the UK’s continued membership of a reformed EU and expressed their ongoing commitment to working with him on renegotiating the UK’s terms of membership.

So far, Mr Cameron’s stand against Mr Juncker has been greeted warmly by Eurosceptic Conservatives, even though he will be outvoted when he insists on pushing the matter to a qualified majority vote on Friday.

Congratulating him, one of the most Eurosceptic of his MPs, Gerald Howarth, said he has shown “judgment and resolution” in standing up for the UK’s interests and “is in tune with the concerns of the public right across Europe, unlike so many of our continental partners”.

“However, we won’t reveal what final steps we could take if and when we are outvoted: we will say that when we are in that position. That’s a conversation for two days’ time,” number 10 sources told The Irish Times.

Illustrating London’s frustration, number 10 pointed out that the rules changed to allow qualified majority voting under the Nice treaty, which came into force in 2003, but it was not used when José Manuel Barroso was appointed in 2004 and again in 2009.

Mr Cameron will respect president of the European Council Herman Van Rompuy’s plans to keep discussion about the commission head to Friday’s meeting, rather than letting it dominate tonight’s dinner in Ypres.

Pressed to explain London’s antipathy towards Mr Juncker, number 10 insists he is too much of a Euro-federalist and does not understand the anger and disconnection that was shown by millions in the European Parliament elections.

However, not everyone in the British government is so opposed to the Luxembourger, with minister without portfolio Ken Clarke – the longest-serving minister in government – saying he was not sure why Mr Juncker provoked such opposition.

“No one knows what he’s supposed to have done wrong. The idea he’s an arch-federalist, a sort of public enemy number one, which the media have made him in the last few days flat, is slightly exaggerated,” said Mr Clarke. The row had been “blown out of proportion”, he added.