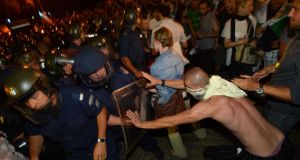 Protesters clash with Bulgarian riot police during an anti-government protest in front of the parliament building in Sofia. Photograph: AP Photo/Georgi Kozhuharov 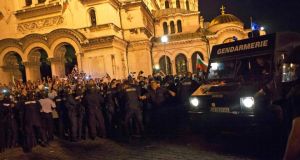 Anti-corruption protesters yesterday demanded the immediate resignation of the Bulgarian government after a night of clashes in front of the parliament in Sofia.

More than 100 lawmakers, ministers and journalists spent the night besieged inside the parliament before police evacuated them early yesterday amid scuffles and angry exchanges with demonstrators.

Thousands of mainly well-educated Bulgarians have rallied daily in Sofia for the last 40 days to demand the resignation of the Socialist-led government that took office in May after an inconclusive election.

Protests in the southeastern European state, a member of the EU since 2007, began following a government decision to name media magnate Delian Peevski as chief of the State Agency for National Security.

Many saw the appointment as an example of the murky ties between politicians and businessmen and though the government withdrew his nomination, the protests have persisted amid widespread disenchantment with the political class.

Apparently encouraged by the visit to Sofia of EU justice commissioner Viviane Reding and her support for the protests, demonstrators decided to increase pressure on the parliament on Tuesday night.

Ms Reding had told civil society groups in Sofia this week: “My sympathy is with the Bulgarian citizens who are protesting on the streets against corruption. Bulgaria must continue its reform efforts.”

Protesters’ anger increased when when the government headed by Plamen Orecharski decided to urgently proceed with a revision of the 2013 budget in a move that increased the budget deficit by about €250 million.

Centre-right opposition parties and some analysts saw the budget change as further evidence the government planned to fuel spending rather than carry out any significant reforms.

Hostages
The revisions were immediately approved, however, by the budget and finances, economic, and social policies committees of parliament, a move described by some protesters as “the straw that broke the camel’s back”.

Several hundred protesters responded to the budget decision by blockading politicians and journalists inside the parliament building, shouting terms of abuse such as “red garbage” and “mafia”, and urging the government to resign. They tore up paving stones and piled up garbage to create barricades.

Scuffles broke out when the authorities organised for those blocked inside the building to be evacuated by bus. A total of 18 people, including five police officers, were injured. One of the injured policemen was detained in hospital.

Minister of interior affairs Tzvetlin Yovchev condemned the protests. “The rights of the lawmakers and the journalists were violated, they were treated as hostages”, he said, adding that he had approved the evacuation plan.

Chief prosecutor Sotir Tzatzarov, however, said the evacuation operation was the main reason for the scuffle. He said it had “not the best thing from a tactical point of view”.

In a statement, Bulgaria’s president Rosen Plevneliev said there was no aim justified by violence. “We were witness of scenes far away from a democratic process”, he said.

Acceptable outcome
Former Bulgarian president Gueorgui Parvanov said the protests were similar to the events in 1997, when the then socialist government of Jean Videnov was forced to step down.

Protesters insisted the only acceptable outcome would be the resignation of Mr Orecharski and his government.

Mr Plevneliev was quoted by the Wall Street Journal as saying he was ready to nominate a caretaker government if the existing one resigned. Later his office denied the quote .