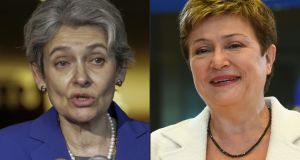 The race to succeed Ban Ki-moon as secretary general of the United Nations took a fresh turn on Wednesday as Bulgaria nominated European Union commissioner Kristalina Georgieva for the position.

The Bulgarian government confirmed that it was withdrawing its support for candidate Irina Bokova and instead nominating the country’s EU commissioner Ms Georgieva following a cabinet meeting.

Ms Georgieva, currently a vice-president of the European Commission who holds the portfolio of budget and human resources, will take unpaid leave from her position in Brussels to campaign during the month of October, the commission confirmed on Wednesday. German commissioner Günther Oettinger will assume her responsibilities temporarily.

Highly-respected in EU circles, Ms Georgieva held the position of commissioner for humanitarian aid in the second Barroso commission, assuming the role in 2010 when Bulgaria’s original nominee failed to be endorsed by the European Parliament. The 63-year-old commissioner, who holds a PhD in economics, was previously vice-president of the World Bank.

The decision to replace Ms Bokova as the government’s nomination with Ms Georgieva was taken after Ms Bokova finished sixth out of nine contenders for the position in a secret ballot taken at the UN security council on Monday.

Ms Bokova is currently the head of Unesco, the cultural wing of the United Nations.

Bulgarian prime minister Boiko Borisov had previously indicated he would reconsider Ms Bokova’s nomination if she did not come first or second in the ballot.

“We consider that this will be a more successful nomination,” he said on Wednesday following the decision.

Ms Bokova has indicated that she does not intend to withdraw her candidacy.

But Ms Georgieva’s gender and her nationality could be a key advantage in her bid to become the UN chief.

Mr Ban said last month that his successor should be a woman, pointing out that it was “high time” for a female secretary general to lead the organisation established 70 years ago.

“We have many distinguished and eminent women leaders in national governments or other organisations or even business communities, political communities, and cultural and every aspect of our life,” he said. “There’s no reason why not in the United Nations.”

There have also been calls – not least from Russia - for an east-European candidate to be considered for the post.

The 15-member UN security council must nominate a candidate to the 193-member assembly, with a final decision expected next month. Mr Ban is due to step down at the end of this year having served two five-year terms.

Announcing the news that Ms Georgieva would step-down from her duties temporarily, a European Commission spokesman said the commission would “ensure a strict separation between activities relating to her candidacy and her work as member of the college [of commissioners] in a truly transparent manner.”