Demands in Dublin not a ploy to delay bank recapitalisation, officials say 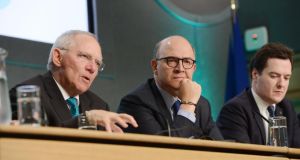 
In the euro crisis, Berlin has wielded three instruments of torment to extract political concessions from EU partners.

The first two, labelled “constitutional court” and “Bundestag” respectively, are used by Berlin in late-night Brussels meetings to draw political lines in the sand. We’d love to give you this or that, German negotiators say apologetically, but we wouldn’t get it past Karlsruhe or the Bundestag.

Ask constitutional judges or Bundestag MPs about their stumbling-block reputation, and they complain about the frequency with which they are deployed by Berlin officials as smokescreens for their own political ends.

So was German finance minister Wolfgang Schäuble following this approach when, in Dublin last weekend, he extracted a third instrument from Berlin’s toolbox of political persuasion: treaty change?

Dr Schäuble insisted that banking union – the plan for an integrated financial landscape to avoid another European crisis – would not be possible without further changes to European treaties.

Berlin’s critics complained Dr Schäuble had pulled treaty change out of his sleeve at the 11th hour to postpone banking union and barricade the door to direct recapitalisation of European banks – a politically unpalatable prospect for the German government ahead of September’s general election.

Other observers suggested Berlin had put the prospect of treaty change on the negotiating table to soften up EU partners to a quid pro quo on other policy matters close to German hearts.

Berlin officials insist the treaty change call is not an act of political procrastination but a real demand based on two concerns.

The first is to ensure legal separation between the single supervisory mechanism (SSM) and the governing council of the European Central Bank. Non-euro European countries are not going to join the SSM without this, Berlin worries. This could be addressed with a limited treaty change, Berlin legal eagles believe, which might obviate the need for an Irish referendum.

Neither treaty change has to happen in the short term, German officials say, nor are they belated political preconditions for allowing bank recapitalisations from the European Stability Mechanism.