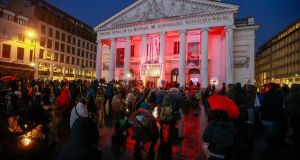 People gather outside the Royal Theatre of the Mint in Brussels to support the cultural sector, which has denounced the lack of financial support and lack of solutions during the current crisis. Photograph: Stephanie Lecocq/EPA

Belgium is to ban all non-essential trips to and from the country as the European Union prepares tighter rules on travel in response to alarm over new variants of Covid-19.

An appeal to Belgians not to travel over the Christmas and new year holiday period failed to prevent tens of thousands of people from going on ski trips and sun holidays, according to the government.

With the traditional mid-February half-term holiday approaching, authorities are determined to avoid a repeat of last year, when tourists caught Covid-19 at Alpine ski resorts and at carnival parties and brought the virus home, fuelling the first wave of transmissions.

The emergence of new strains of Covid-19, including a more infectious and deadly variant first detected in England that is now thought to make up over half of cases in Ireland, is fuelling momentum for new rules to dissuade people from all but essential travel within the bloc.

“We are going to protect our country against virus variants from abroad, that is our damn duty to our citizens who follow the rules,” declared Belgian health minister Frank Vandenbroucke.

The government announced that all travel in and out of the country for a “recreational or touristic purpose” would be “prohibited” from this Wednesday until March.

Belgium had already urged people not to travel and imposed testing and quarantine obligations on arrivals from abroad, but the new ban of non-essential travel will require travellers to carry a sworn statement that their trip is vital.

Travel deemed “essential” includes commuting to school or work across the border, travel for co-parenting reasons, or attending funerals. People who return from essential trips of longer than 48 hours will have to quarantine for 10 days and take two tests for Covid-19 infection, on their day of arrival and seven days after.

Belgian has been one of Europe’s hardest-hit countries over the course of the pandemic, but the situation has currently “stabilised”, prime minister Alexander De Croo told a press conference.

“We must build a bulwark against the importation of the virus,” Mr De Croo said. “When people travel, the virus travels with them.”

The developments come as a string of EU countries impose tough domestic restrictions to try to bring down spread, amid concern that new mutations could emerge that are resistant to vaccines.

German chancellor Angela Merkel has also warned she will not rule out border closures unless stricter common EU rules are agreed, to avoid a new wave of infections before vaccines can be rolled out.

EU member states this week agreed to work on stricter common travel rules on both travel with the bloc and arrivals from non-EU countries, and the European Commission is due to propose fresh measures on Monday.

A new category for the countries with the highest rates of Covid-19 infections is to be introduced on the EU’s traffic light system: “deep red”, to allow for tougher restrictions on travel from such zones. This will include Ireland, which currently has the highest level in the EU on the ECDC chart on which the system is based.