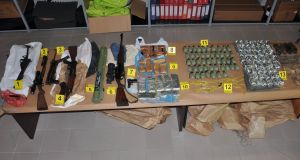 Weapons, explosives and ammunition seized during an police action near the northwestern Serbian town of Apatin. Photograph: /AFP/Getty Images

Serbia is urgently checking state arms depots after scores of guns were found to be missing from a military warehouse, fuelling concern over Balkan weapons smuggling amid a series of major security scares around the region.

Last week Serbia announced the arrest of 10 people suspected of arms trafficking, after the country’s police uncovered their biggest haul of stolen weapons in 16 years.

“There are always concerns about the terrorist threat,” he added.

Some guns used in last year’s terror attacks in Paris, which killed 130 people, were made in Serbia, and the ex-Yugoslav state and France last month launched a joint campaign to halt arms smuggling from a region still awash with weapons from the wars of the 1990s.

A string of recent security alerts around the Balkans has added to a sense of urgency over the need to better monitor and interdict weapons flows.

At least 25 people were arrested this month in Kosovo, Albania and Macedonia for involvement in suspected terror plots, including an alleged plan by the Islamic State group to attack Israel’s national football team while it was in Albania for a World Cup qualifying match on November 12th.

Safety concerns prompted the match to be moved closer to Albania’s capital, Tirana, and for sweeping security measures to be implemented.

Kosovo police said the attack was ordered by Lavdrim Muhaxheri, a Kosovar who is Islamic State’s self-styled “commander of Albanians in Syria and Iraq”, and that officers had seized weapons and explosives.

Hundreds of people from Balkan states have gone to the Middle East to join radical groups such as Islamic State. Dozens have since returned home, and security services say they are closely monitoring their activity.

Late last month, Serbian police found weapons stashed in woods beside a road used regularly by the country’s prime minister Aleksandar Vucic near his family home, raising suspicion of a possible plot to assassination him.

Security officials said the arms found there included hand grenades, a rocket-propelled grenade launcher and ammunition for a sniper rifle. A few days later, police found explosives, two mobile phones capable of detonating them, and guns at another Belgrade location. It is not clear if the discoveries were linked.

The scare around Mr Vucic came just days after Montenegro arrested several Serbs in connection with an alleged plot to assassinate pro-western Montengrin leader Milo Djukanovic, in which Russian ultra-nationalists were allegedly involved.