Heavily armed French anti-terror forces scour eastern city of Reims and search an apartment in hunt for the men wanted in connection with the attack on the headquarters of a satirical magazine in which 12 people died. Video: Reuters 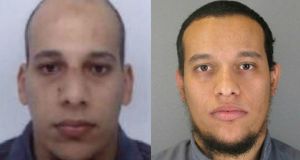 French police have released photographs of the brothers Cherif Kouachi (L) and Said Kouachi, who are suspects in the Charlie Hebdo shooting that killed 12 people.

One of two brothers being hunted over the Charlie Hebdo massacre is reported to be a convicted Islamist who was well-known to police and had dreamed of attacking Jewish targets in France.

According to media reports, Cherif Kouachi (32), was first considered to be a possible terrorist by the French authorities when he was in his early 20s.

He is believed to have come under the influence of a radical Paris-based Islamic preacher and was reportedly convicted of a criminal charge in 2008 after associating with an illegal organisation backing jihad in Iraq.

Mr Kouachi, originally from the Paris suburb of Pantin, was sentenced to three years in prison with 18 months suspended.

His older brother, 34-year-old Said Kouachi, is also being sought in connection with Wednesday’s shootings.

French newspaper Liberation described Cherif Kouachi, whose parents were Algerian immigrants, as an orphan who was raised in foster care in Brittany.

He is said to have trained as a fitness instructor before moving to Paris, where he lived with his brother and worked as a shop assistant before attempting to travel to Iraq via Syria aged 23.

It is believed that Mr Cherif was radicalised after expressing anger at the 2003 invasion of Iraq and the mistreatment of Iraqis held at Abu Ghraib prison.

Unconfirmed reports also suggest that the attack at Charlie Hebdo could be linked with Yemen-based militant group al-Qaeda in the Arabian Peninsula (AQAP).

Intelligence sources are said to believe that the brothers might have trained in Yemen.

The third suspect, Hamyd Mourad (18), is believed to be from the Reims area and is also thought to have links to Algeria.

He surrendered at a police station in the Champagne region Wednesday evening after hearing his name on the news in connection with the attack, a judicial official said.