Amnesty for Grenfell residents in bid for true death toll 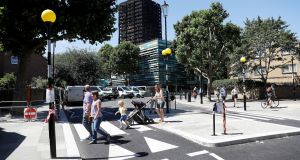 People walk in the neighbourhood of the Grenfell Tower, destroyed in a catastrophic fire, in London. Photograph: Reuters/Peter Nicholls

Fresh efforts to pin down the true death toll of the Grenfell Tower tragedy have begun with an offer of legal protection for its subletters.

In a push for information about potential new victims, the government announced no one from the block would face charges for illegally renting out their flats.

It is feared the scale of the tragedy has not been captured by official figures due to many residents living in the building off the books.

The development came as 181 high-rise buildings were confirmed to have flammable cladding akin to that suspected of quickening the spread of last month’s inferno.

Material from hundreds of buildings across the UK are being subjected to government-backed fire safety tests in the aftermath of the blaze, which left at least 80 dead.

Towers in 51 local authority areas have failed the test – including 29 in Salford alone, the government said.

Communities secretary Sajid Javid confirmed the legal amnesty on Sunday afternoon, citing “anecdotal evidence” that tenants were subletting properties at the time of the fire.

The move had been agreed in consultation with the director of public prosecution Alison Saunders and attorney general Jeremy Wright.

Mr Javid said: “I would urge those with information to come forward without fear of prosecution.”

As authorities continue to build a picture of the disaster, the public inquiry into its roots hit early turbulence.

Campaigners warned a boycott could be afoot unless the process, led by retired judge Sir Martin Moore-Bick, considered systemic issues as well as simply the cause of the fire.

Sir Moore-Bick had previously indicated the scope of his investigation would be limited to what started the fire, how it spread and how it could be prevented in future.

A consultation period about the inquiry’s terms of reference is aiming to conclude by the parliamentary recess on July 20th, giving survivors just weeks to make a case for the probe broadening.

Labour MP David Lammy called for the former court of appeal judge to forge closer links with victims so the process could maintain legitimacy in their eyes.

“He is a white, upper-middle class man who I suspect has never, ever visited a tower block housing estate and certainly hasn’t slept the night on the 20th floor of one,” he told Sky News’s Sophy Ridge On Sunday.