Austrian coalition set to hold on to power 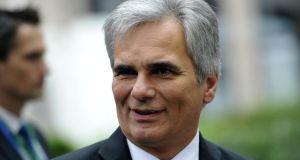 Austrian voters are likely to return their little-loved grand coalition when they go to the polls to elect a new government tomorrow.

But three populist parties have almost a third of the vote, profiting from a growing frustration with corruption and cronyism associated with the two parties that have carved up power for most of Austria’s postwar history.

“The economy and jobs are what concerns people most and will be the core of my politics for the next five years,” said Mr Faymann on a factory visit in western Austria.

His conservative opposite number, foreign minister and ÖVP leader Michael Spindelegger, opposes tax cuts before the budget is balanced and accuses the SPÖ leader of being out of touch.

Continuity candidates
With Austria boasting the EU’s lowest jobless rate of 6.7 per cent, both leaders have presented themselves as continuity candidates in a time of uncertainty. But looming low growth of just 0.6 per cent this year has seen them accused of modest will to tackle overdue health and pension reform.

Conspicuously absent in the campaign was any real debate about the EU and its crisis-wracked currency and the final cost of the €15 billion bank rescue fund set up to bankroll the nationalised lender, Hypo Alpe Adria.

Another five-year term for the grand coalition is likely – though smaller parties are determined to make it a close race. The opposition Green Party is polling 15 per cent and hoping for its best result, but all eyes are on Austria’s populist fringes.

The right-wing xenophobic Freedom Party (FPÖ) had hoped to become Austria’s second-largest party in this election. Those hopes have been dashed by the arrival of Team Stronach, financed by Austro- Canadian billionaire Frank Stronach. It has poached some FPÖ protest voters with promises to cut corruption, debt and bureaucracy.

‘Love thy neighbour’
FPÖ leader Heinz-Christian Strache has attempted anxious to shed his party’s xenophobic reputation, running what he called a “love thy neighbour” election campaign, attacking the cost of bureaucracy and bank bailouts.

“We want to make sure that ‘love thy neighbour’ doesn’t apply to banking speculators rescued in Brussels but for people here are given the support they need,” he said.

His new empathetic side was undermined by his attack in parliament on “labour displacement through Romanians and Bulgarians” and images of the FPÖ youth wing giving the Hitler salute in Graz.

Two smaller liberal parties – the Neos and the Austrian Freedom Alliance – will struggle to cross parliament’s 4 per cent threshold.

While no revolutions are likely in this election, the steady growth in smaller populist parties comes at the expense of the two grand coalition parties which, in the 1970s, commanded more than 90 per cent of the vote.

“Things are tightening up and this may be the last election where the SPÖ and ÖVP win 50 per cent of the vote,” said Dr Markus Wagner, political scientist at the University of Vienna.

“We now have almost a third support for a variety of xenophobic, Eurosceptic parties. It’s shocking how normal it has become.”