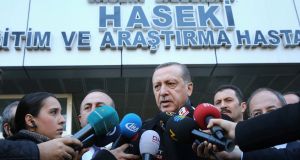 Austria has threatened to freeze EU accession talks with Turkey in protest at President Recep Tayyip Erdogan’s crackdown on the Turkish opposition since July’s failed coup.

Mr Kurz said Austria was not prepared to agree to the current draft resolution because it did not contain the “necessary reaction to developments in Turkey”.

“Dissidents are being intimidated, opposition politicians locked up, the death sentence is supposed to be restored,” he said to Austrian news agency APA ahead of the latest Turkish bombing. “A clear reaction of the EU is needed.”

The Austrian foreign minister warned of a “dangerous form of dependency” if the EU, to keep intact its refugee swap deal with Turkey, appeased Ankara by looking away from the current crackdown.

The move by Mr Kurz, co-ordinated with his Dutch and Bulgarian counterparts, follows a non-binding vote by the European parliament to put EU-Turkey talks on ice.

The Austrian move puts Vienna on a collision course with Berlin and Brussels. Germany’s chancellor Angela Merkel, politically never enthused by Turkey’s EU ambitions, has insisted on the continuation of “open-ended talks” with Ankara, steered by the European Commission.

Asked if the talks were on target, Mr Juncker said “it doesn’t look that way, quite the contrary”.

The weekend bombings may change that, however, and Mr Kurz’s threat is likely to up the political ante ahead of this week’s end-of-year EU leaders’ meeting in Brussels.

The Austrian’s remarks on Turkey come amid speculation that Mr Kurz may take over leadership of Austria’s beleaguered conservative People’s Party (ÖVP). Austria’s 30 year-old foreign minister has established high political credibility in Austria by closing the so-called “Balkan route” to refugees and adopting a tough line on Turkey.

“If they aren’t serious, we should halt the payments,” he told the Bild am Sonntag newspaper.

Ahead of the meeting in Brussels, Minister for Foreign Affairs Charles Flanagan condemned “unreservedly” the football stadium bombings, and expressed his condolences to the families of the dead.

“I utterly reject terrorism in all its forms, and repeat that we, along with other European Union member states, stand in solidarity with Turkey in the fight against terrorism.”

Along with his EU counterparts, Mr Flanagan will sign the first ever EU-Cuba political dialogue and co-operation agreement with the Cuban foreign minister Bruno Rodriguez Parilla.