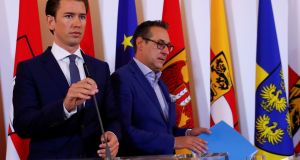 Austria’s new government, which includes the far-right Freedom Party, has started a clampdown against “political Islam”, announcing the closure of seven mosques and plans to expel up to 40 imams from the country.

Chancellor Sebastian Kurz announced the move at a joint press conference with leaders of the Freedom Party in Vienna on Friday, saying it followed the abuse of Austrian laws prohibiting the foreign financing of religious communities, as well as other violations of basic values.

The steps will affect imams who receive financing from Turkey, according to the government. Four out of the seven mosques targeted are in Vienna.

Mr Kurz said Austria took pride in its cultural diversity but warned that “parallel societies have no place in our country”. He became chancellor in December after striking a coalition agreement with the Freedom party, which is one of Europe’s most established nationalist and Eurosceptic political movements.

Under the coalition deal, the Freedom Party took control of the defence and interior ministries, giving it control over Austria’s security services as well as immigration policies.

On Friday a spokesman for Recep Tayyip Erdogan, the Turkish president, described Mr Kurz’s announcement as a reflection of “the Islamophobic, racist and discriminatory wave” in Austria. He added: “It is an attempt to target Muslim communities for the sake of scoring cheap political points.”

Ankara has sought to mend strained ties with the EU in recent months after a series of rows with Germany, Austria and Holland over deteriorating human rights in Turkey and the refusal of western European countries to allow Turkish ministers to campaign for votes on their soil.

Mr Erdogan, who last year compared the German and Dutch governments with Nazis, has toned down his harsh language as EU leaders have sought to promote co-operation on areas of common interest, including refugees and security.

Some diplomats fear, however, that tensions will flare up again when Austria, which has long been a staunch opponent of Turkey’s aspirations to join the EU, takes over the bloc’s rotating presidency next month.

Heinz-Christian Strache, the Freedom Party’s leader, warned in last year’s election campaign that “Islamification” posed “huge dangers” for Austria and would be the most pressing issue for the new government. At Friday’s press conference he hinted further steps could follow. “We’re at the beginning but showing decisiveness,” he said.

Mr Kurz has won international headlines for taking a tough line on controlling immigration, which resulted in him clashing with German chancellor Angela Merkel during Europe’s migration crisis in 2015. He also expressed sympathy with the fears of the Freedom party about Austria’s “Islamification”.

After his election in October last year, Mr Kurz told the Financial Times: “We have a problem with political Islam in Austria. Several hundred people have made their way from Austria to fight and murder for the Islamic State in Syria and Iraq. We also have the problem of trends here in Austria that are worrying.” - Copyright The Financial Times Limited 2018