Austria on edge as far-rightist leads in presidential vote 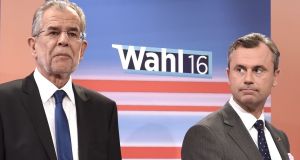 Presidential candidates Alexander Van der Bellen (left) of the Austrian Greens and Norbert Hofer (right) of the Austrian Freedom Party (FPÖ) during a live television discussion after the second round of Austrian presidential elections on May 22nd, 2016, at the Hofburg palace in Vienna. Photograph: Helmut Fohringer/AFP/Getty Images

Austria’s presidential election was on a knife-edge on Sunday night, with the leader of the populist Freedom Party (FPÖ) within touching distance of becoming western Europe’s first far-right head of state in the postwar era.

Preliminary results from the interior ministry showed FPÖ candidate Norbert Hofer in the lead on 51.9 per cent, just ahead of independent Alexander van der Bellen on 48.1 per cent.

But with more than 700,000 postal votes not due to be counted until today, the result was too close to call. A projection by the SORA institute for public broadcaster ORF made the race a statistical dead heat.

“The sovereign has spoken,” said Mr van der Bellen (72), an economics professor who once led the Green Party. “What exactly it has said – Hofer or van der Bellen – we will know tomorrow afternoon.”

The precise number of postal votes is not known, but interior minister Wolfgang Sobotka said he expected there would be about 750,000 – 12 per cent of eligible voters. Postal votes tend to be used by the more highly educated, a spokesman for SORA said, a group among which Mr van der Bellen has greater support.

“I have been in politics a long time and I have never experienced an election night like this,” Mr Hofer told ORF.

Although the Austrian presidency is mainly a ceremonial role, the strong showing by 45-year-old Mr Hofer is a huge boost to the FPÖ, which hopes to win the chancellorship after federal elections due by September 2018.

The rise of the Eurosceptic party, which calls for border closures and Austrian-first social policies, has come as a thunderbolt in a country where two centrist parties have dominated since 1945.

The ruling coalition’s candidates were humiliated in the first round of the presidential vote, and defeat led to Social Democrat Werner Faymann’s resignation as chancellor.

The FPÖ, benefiting from disenchantment with the major parties and a stuttering economy, has stoked concerns that immigrants could overwhelm public services.