Attempt to ‘right’ Costa Concordia has ‘quite a few risks’

A salvage team removing the wreck of the Costa Concordia from its resting place of the coast off Giglio, Italy, have reached a crucial stage of the $300m project. Using a technique known as parbuckling, the cruise ship is about to be rotated upright. 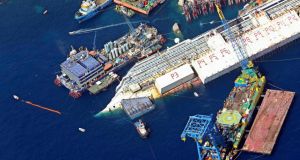 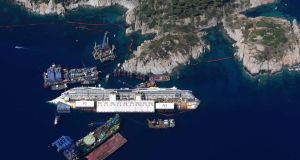 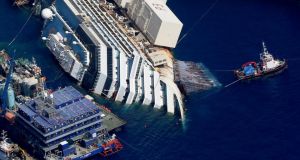 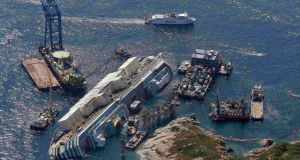 Senior salvage master Nick Sloan, the man in charge of the complex operation which next week will see his team of experts attempt to “right” the stricken cruise liner, the Costa Concordia, admits quietly that, yes, “there are quite a few risks” attached to this unprecedented salvage operation.

Speaking at a press conference in Rome today to announce details of easily the most critical and spectacular part of the Concordia “recovery” operation, Captain Sloan made no attempt to play down the difficulties of returning the 300 metre long, 114 tonnes weight Concordia to an upright position.

The cruise liner still lies on her side in shallow water just off the Tuscan island of Giglio, in exactly the same spot where she ran aground on the evening of January 13th last year with the loss of 32 lives.

Following an initial period when rescue workers were concentrated on attempting to find survivors, the Costa Concordia has been the focus of a massive “clean-up” operation for the last 16 months.

The salvage operation’s first priorities were to drain off the ship’s fuel, before disposing of the sewage, waste material and various objects that fell into the sea from the stricken vessel.

For the last year, however, the salvage operation has concentrated on one objective – namely the Parbuckling Project. In 19th century parlance, a “parbuckle” was a sort of sling or doubled rope with which sailors would raise or lower barrels. In this case, to parbuckle a vessel means to try to right the vessel using leverage applied via a series of cables.

Captain Sloan concedes that, although there is nothing new about a parbuckling operation, this particular one poses some serious problems essentially because of the huge size of the ship and because of her location, lying on two spurs of rock just off land.

For the last year, the Titan-Micoperi US-Italian salvage consortium has worked on a bewildering series of preparations to refloat the Concordia.

Firstly, the wreck had to be anchored and stabilized to stop her slipping off the spurs of rock on which she is currently stuck. Secondly, some 12,000 cubic metres of cement pumped into grout bags was used to fill the “valley” between the two spurs of rock, in order to further stabilize the ship. Thirdly, 11 anchor blocks were secured to the sea bed.

Initially these guaranteed stability but, equipped with computer controlled hydraulic mechanisms for pulling cables, they become key players in the “parbuckling” operation.

At the same time, a complex “false sea bed”, essentially a huge subsea steel platform, was drilled into the granite sea bed, whilst large tanks called “sponsons” were placed on that side of the ship which lies out of the water. These sponsons will provide both leverage and buoyancy during the righting of the ship.

All being well, weather-wise, the 10-12 hour long parbuckling operation is due to start early next Monday morning. Once started, there is no going back, says Sloan. He and his team have to press on, hopeful that all their calculations about the state of the ship are correct and that there is no chance of it breaking up as it is rotated 65 degrees to regain a vertical position.

Once righted and again stable, then rescue workers will begin the sad business of looking through the ship for the still unrecovered bodies of two of the victims. After that, the ship will be repaired just enough to make sure that she can be towed into a nearby port, perhaps Piombino, where she will be scrapped.

That, however, will not be the end of the Costa Concordia story since the shipwreck has prompted a vast range of litigation. For a start, the ship’s captain, Francesco Schettino, will face trial, charged with manslaughter, causing a shipwreck and abandoning his ship.

For a second, even though many of the ship’s 4,000 passengers have already accepted € 11,000 euros compensation for their ordeal, some groups are holding out for more and are taking cases against either the ship’s Italian owners, Costa Crociere, or against parent company, the US based Carnival Corporation.