As one Calais camp faces closure, more will take strain 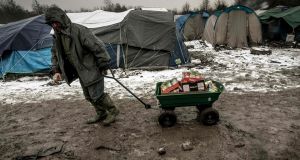 A man carries food at the refugee and migrant camp in Grande-Synthe near Dunkirk, northern France, where 2,500 refugees from Kurdistan, Iraq and Syria live. Photograph: Philippe Huguen/Getty Images

Two hours northwest of Brussels on the Belgian- French border, a steady stream of cars lines up at the French side of the crossing. Teams of police, armed with guns and tasers, stop each incoming vehicle, demand proof of identification as they systematically search the boot of every car. This is Schengen in 2016.

The European Union’s free travel area, introduced 21 years ago, is facing the biggest crisis in its history, as member states unilaterally introduce border checks in response to the refugee crisis.

That Belgium, one of the fiercest proponents of European integration, which fought to the end to resist David Cameron’s challenge to the principle of “ever-closer union”, has moved to shut its border is an indication of the depth of the crisis engulfing the free travel area.

This week’s move by the Belgian federal police to introduce systematic border checks was prompted by developments 60km down the coast in Calais.

The decision by a court in Lille to order the partial evacuation of the refugee camp known as “the Jungle” has raised fears in Belgium that many of its residents may move into Belgium to reach Ostend and Zeebrugge, the departure point for hundreds of ferries leaving for Britain. Up to 450 people have been stopped in Zeebrugge since the beginning of the year, according to officials.

Belgium’s interior minister Jan Jambon has defended the introduction of border controls this week, hitting back at French criticism of the move. He argued the numbers justified the action, pointing out that 32 migrants were arrested at the border near the North Sea on Monday night.

“It’s our express intention to avoid tent camps like Calais in our country,” he said.

It is developments such as the rapidly deteriorating situation 25 miles down the road in the border town of Dunkirk that is worrying Belgian officials.

The scene is shocking. Hundreds of tents have been erected on muddy, filthy ground. The smell of wood smoke fills the air as refugees warm themselves at campfires. Children wander among the piles of detritus between flimsy tents that are sinking into the mud.

Conditions in the site, less than three hours’ drive from the great European capitals of Brussels, Paris, and London, are worse than any camps this reporter has visited in Bulgaria or Turkey.

The incongruity of the sprawling camp in this suburban setting is striking. It is metres from a neat row of houses; a garden centre and cluster of local shops are just down the road. In this wasteland, two parallel worlds operate cheek by jowl.

The 300 or so people who lived in Grande-Synthe last summer have increased to almost 3,000, though the numbers fluctuate daily.

Many fear the Calais eviction will bring further new arrivals.

Arya, a 35-year-old Kurdish Iraqi is typical of the residents of the Dunkirk camp. An agricultural worker in Iraq, he travelled through Turkey and Bulgaria before reaching Serbia, Hungary and Austria, and on to Belgium. He spent some months at the Calais Jungle before moving to Dunkirk four months ago. Eager to talk, he asks me whether Ireland offers work permits for Iraqis, and if it is possible to reach Ireland directly via boats from France.

Like most of the residents here, he wants to move to England because he speaks English. He tells me he has already spent close to $10,000 (€9,150) on his passage to Belgium and failed attempts to reach the UK.

Many of the residents of the camp are stateless, reluctant to apply for asylum in France or Belgium for fear it will scupper any change of securing refugee status in Britain, if they ever get there. They are gradually slipping into an existence of permanent dispossession, existing in a no-man’s land.

For aid agencies and volunteers, the challenge is growing by the day.

Médecins Sans Frontières (MSF) is supplying daily medical treatment six days a week, and also operates sanitation facilities. While the municipal authorities have provided electricity and water, MSF are responsible for emptying and cleaning the 42 chemical and bacterial toilets, and providing between 200 and 300 showers a day.

Other volunteer organisations such as Refugee Community Kitchen serve food to the residents each day.

For the residents I speak to, most of whom are Kurds from Syria and Iraq, things have improved dramatically in the last few weeks. But, as MSF’s Shay Rojansky explains, the limited facilities at the camp are now at breaking-point. “This worked to some extent when it was just 200, 300 people. The infrastructure simply cannot cope when it is 2,000 or 3,000,” he says.

It is for this reason MSF has taken the unusual decision to erect a new camp, ten minutes away. The project, which is also supported by the local authorities, is due to open in the coming weeks, and aims to rehouse the residents of the current Grande-Synthe camp.

For the thousands of homeless migrants residing in Dunkirk, the new facility will be the latest place of refuge for those who are increasingly calling this corner of northern Europe home.

1 Eating out in Dublin – the homeless way
2 Which jobs do teenage girls and boys aspire to have by age 30?
3 Independent TD Tommy Broughan announces retirement from Dáil
4 Irish Times poll: Large majority want change of government
5 Election 2020: Peter Casey to stand in both Donegal and Dublin West
Real news has value SUBSCRIBE