Analysis: Turkish leaders intent on battling Kurds and IS 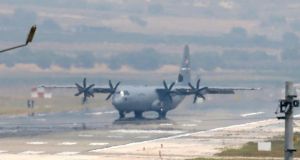 A US Air Force transport plane on the runway at Incirlik Air Base, on the outskirts of the city of Adana, southeastern Turkey on Tuesday. Turkish warplanes started striking militant targets in Syria last week and also allowed the US to launch strikes from Incirlik Air Base. Photograph: AP

The airstrikes on Kurdish militants and the singling out of Kurdish-linked politicians for criticism has raised eyebrows, not least because the Kurds have been at the forefront in the fight against IS in a war no one wants to become involved in.

The two-pronged operation was launched in response to a bombing in Suruc, which killed 32 youth activists, by an affiliate of Islamic State on July 20th, as well as the slaying of two police officers by the PKK two days later. The activists were leftists, some of them Kurds, and Ankara’s lack of response to the Suruc bombing, the PKK said, forced the Kurdish militants’ hand.

While the wider world has followed the audacious rise and brutality of IS for the past year, the low-intensity conflict between the Turkish state and Kurdish militants has gone on for decades, informing the views of political leaders and Turkish civilians alike for more than 30 years.

“The PKK is a terrorist organisation. It’s up to the government to fight it,” said a Turkish official who refused to be named. “It’s normal for a state to fight terrorism; the state has a right to protect itself.”

More than 4,000 soldiers and almost 2,000 police have been killed by the PKK since the early 1980s. Despite a precarious peace process that began in 2013, recent days have seen a return to tit-for-tat attacks on police and soldiers stationed in southeast Turkey.

Erdogan’s hopes of introducing a presidential-type system of government were knocked back by voters in parliamentary elections last June. The AK Party has since been forced to form a coalition government, which it has so far failed to do.

“The government is trying to turn this into a political clash, especially as there might be an election in the fall,” said Mustafa Akyol, an author and columnist.

But it is not just the government and its supporters who are accusing Kurdish interests of destabilising the country. Turkey’s third largest party, the Nationalist Movement Party, has for decades vehemently opposed progressive dealings with the PKK.

A poll last conducted last by Kadir Has University found that almost half of Turks surveyed opposed the government’s PKK peace process; 25 per cent supported it.

“There is a long and traumatic history to the Turkey-PKK conflict that society has yet to come to terms with,” said Cale Salih, an analyst at the European Council on Foreign Relations. She cites Colombia and Ireland as examples of “sophisticated thinking” regarding their transitional justice efforts.

Yet it is Kurdish forces in both Syria and Iraq that are taking the fight to Islamic State, and at great cost, most recently felt in June, when some 120 civilians were slaughtered by the jihadist group in Kobane.

Since 2012, Kurdish militia forces in northern Syria and Iraq have defended their communities, later taking the fight and regularly defeating jihadists and the Syrian regime on the battlefield. Kurdish peshmerga in northern Iraq were heavily involved in preventing a massacre of 50,000 Yezidis by Islamic State in Sinjar last August.

“Erdogan seems to be betting that whatever move the HDP makes will hurt them in the polls, and possibly bring them below the 10 per cent threshold,” said Salih.

Others believe the PKK to be far from blameless.

“I am not so sure the PKK have been playing it that clean either. Had they been that innocent, I think they would have given [HDP co-chair Selahattin] Demirtas much more room for manoeuvre,” said Kemal Kirisci of the Brookings Institution, meaning that the recent killings of soldiers would not have happened.

The danger for Erdogan is that even more Kurds – a critical voting bloc – could turn away from the AK Party in snap elections, which would be held later this year if a government can’t be formed soon.

That’s down to the HDP refusing to be baited by the AK Party and being seen to acting neutral – but also for the PKK to call off its attacks on soldiers and police. For now, neither scenario appears likely.

For now, neither scenario appears likely.