In TV interview, Tsipras said EU summit in Brussels was a “sad night” for Europe 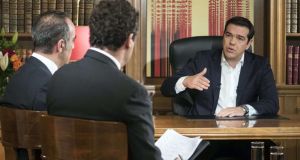 Greek prime minister Alexis Tsipras has said he takes “full responsibility” for signing an agreement he does not believe in and will stay in office to implement the terms of the deal with Greece’s lenders.

In an interview on Greek television on the eve of a key vote on austerity measures required by the creditors as a condition for talks on an €86 billion bailout, Mr Tsipras said Sunday’s EU summit in Brussels was a “sad night” for Europe and that lenders had insisted on measures that were “illogical”.

“I take full responsibility for mistakes and for putting my signature to a document that I don’t believe in but I’m not going to run away from my responsibility,” he said, adding that he would not resign.

He said he would not claim the deal was a “success” but said it contained a number of provisions, including on debt relief and the size of the bailout, that were better than “dead end” proposals rejected by the people in a referendum earlier this month. He stood by his actions, saying he faced a choice between signing or bringing Greece out of the euro.

Mr Tsipras will need support from opposition parties to push austerity measures through parliament today as dozens of MPs in the ruling Syriza party have threatened to break ranks.

At least 25 Syriza MPs have indicated they will vote against the government. No voters from the party’s far-left are expected to break away and form their own parliamentary grouping, which could end up with 30 to 35 MPs, making it the third largest in parliament.

Syriza and its right-wing nationalist junior coalition partner, Independent Greeks, held separate meetings to prepare for today’s sitting, which is also due to consider a Bill for tighter supervision by creditors of the government’s finances.

If more than 12 government MPs vote against the Bills, Mr Tsipras will need opposition votes to push them through. The three largest opposition groups – New Democracy, Potami and Pasok – have indicated they will vote Yes.

Energy minister Panagiotis Lafazanis, leader of Syriza’s far-left faction, has said he will not vote for the measures and is expected to be sacked. Leading ministers said they expected a reshuffle after the passing of the first package of laws.

“This is a tough third bailout and I will not vote for it,” Despoina Charalambidou, a Syriza MP, told Greek radio. She added that she would not give up her seat, saying she was elected on a manifesto that was consistent with her current position.

“The government finds itself in quicksand after the deal with creditors,” the centre-right Kathimerini newspaper said. “Mr Tsipras needs to solve a difficult equation as dissenters on Wednesday’s vote may reach or exceed 40,” it said.

Mr Tsipras needs 151 of 300 deputies to pass the reforms. If the government loses its majority, it could attempt to bring in a new coalition partner or form a government of national unity to push the measures through.

However, government sources ruled out inviting any other opposition parties to join the two-party coalition.

The leader of the centrist Potami party said that while his party would support the government in the vote, it would not join the coalition.