More than 180,000 migrants and refugees have entered Europe by sea so far this year 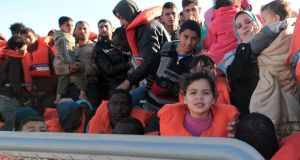 Migrants and refugees disembark from a Maltese coast guard patrol vessel after being rescued at sea. Photograph: Giovanni Isolino/AFP/Getty Images

Aid agency Médecins Sans Frontières has announced it will resume its search, rescue and medical aid operations in the Mediterranean Sea between Africa and Europe.

An estimated 2,892 men, women and children died in 2015 while attempting to cross the deadly stretch of water between Libya and Italy. At least 1,232 people who tried to cross the Mediterranean so far this year have been recorded dead or missing by the International Organisation for Migration (IOM).

Nearly 500 people are believed to have drowned in the Mediterranean last week when an overcrowded boat sank. Only 41 people, including people from Somalia, Sudan, Ethiopia and Egypt, were saved by a passing merchant ship and brought to Greece.

President of Médecins Sans Frontières Joanne Liu warned that the absence of a global solution to the refugee crisis and European states’ “refusal to provide alternatives to the deadly sea crossing” was continuing to kill thousands in what she described as “a mass grave” in the Mediterranean.

“Refugees and migrants are looking for a safer or better life,” said Ms Liu. “It is not acceptable to treat them as criminals, or worse, let them die, in their search for it. Rather than focusing on deterrence and surveillance, European States must provide safe alternatives to sea crossings and a search and rescue mechanism that is both dedicated and proactive. The lives of hundreds of thousands depend on it.”

The first MSF search and rescue ship to be deployed this summer set sail from the port of Valletta in Malta on April 21st. The ship carried out its first rescue operation for 2016 on Saturday when the Dignity 1 accepted a transfer of 308 people from an Italian rescue boat.

The IOM says 180,245 migrants and refugees have entered Europe by sea so far this year, arriving in Italy, Greece, Cyprus and Spain.

The UN Refugee Agency called on Europe this week to provide “increased regular pathways for admission of refugees and asylum seekers to manage the emergency in Europe. Additional possibilities for resettlement and humanitarian admission, family reunification, private sponsorship, and humanitarian and refugee student and work visas all serve to reduce demand for people smuggling, onward movement, and dangerous boat journeys.”