After 100 years, Germans finally feel able to tell their stories of the first World War 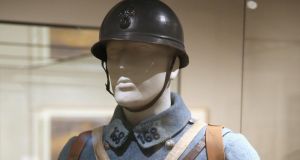 A mannequin dressed in the uniform of a French soldier at the exhibition The First World War, 1914-1918, at the Deutsches Historisches Museum in Berlin. Photograph: Sean Gallup/Getty Images 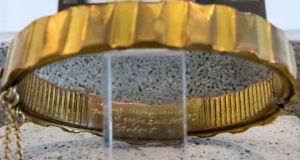 A bracelet made from a grenade driving band on display at the exhibition Terribly Beautiful: Wartime Memories made of Ammunition at the City Museum in Erfurt, Germany. Photograph: EPA/Michael Reichel

On a chilly day in January, elderly Berliners showed up in their hundreds at the state library on Potsdamer Platz. Inside, they peeled off their winter coats and unpacked their private treasures. A bulging green album of silvery propaganda postcards; a letter opener with a mangled shrapnel handle; a tortoise shell minus the tortoise.

This was no flea market but a memory market, a belated expedition down one of Germany’s deepest memory holes. A century after a war that claimed up to 2.8 million German lives, their descendants feel comfortable remembering in public what, until now, has always been a private matter.

“What you see from the mementoes is that the suffering and remembering was very similar across all borders,” said Frank Drauschke, a Berlin historian whose grandfather was sent to the front aged just 19.

The historian co-ordinated the German end of a Europe-wide project to digitise war memories and mementoes that, last year, included an open day at the National Library of Ireland in Dublin.

The German team’s work is online in the engrossing web portal europeana.eu, where, even now, contributors can scan or photograph objects and upload them to the website. In the state library, what united many elderly Berliners was a relief that someone, finally, had given them a chance to tell their family stories before it was too late.

“When their Verdun trench was hit, he was saved because the shrapnel struck the Bible instead of his head.”

For many Germans, this centenary is their first chance to engage with the memory of a war that, unlike in Britain, had nothing “great” about it. The defeated German monarchy collapsed, while the subsequent Versailles Treaty reparations burdened the weak Weimar Republic and opened a door to fascism.

That Germany has no script for remembering the 1914-1918 conflict was clear when, in January, the federal government in Berlin was caught scrambling to organise memorial events.

“Given the horror of the second World War – where the guilt of course strongly lies with Germany – we haven’t had the first World War much in mind,” conceded German chancellor Angela Merkel as she opened a Berlin exhibition last month dedicated to the first World War.

Given the low-key official response, television producers and publishers have stepped into the breach. The Sleepwalkers, by historian Christopher Clark, has been a sensation, with 200,000 copies sold. The Cambridge historian has been celebrated – but also criticised – in Germany for arguing that Kaiser Wilhelm II was no more belligerent in prewar Europe than his neighbours.

“The problem with attributing guilt as your starting point is that you then go off to collect evidence and arrive at the conclusion of guilt,” said Clark at a Berlin discussion organised by the foreign ministry.

“I wanted to ask not who started the war but how it came to war. In these European statesmen [of the time] you see a common political culture, similar behavioural patterns and no longer, necessarily, guilt.”

At the same event, German historian Gerd Krumeich welcomed Clark’s thesis as a timely alternative to framing the first World War as a prelude to the second, with blame for both squarely at Berlin’s door. This standard theory was put forward by German historian Fritz Fischer in the 1960s to shatter West German complacency that the Nazi era was a regrettable accident without precedent.

Krumeich’s concern, however, is that too many relieved Germans have misunderstood Clark’s “sleepwalker” theory as an acquittal of Berlin guilt altogether.

“Even if everyone piles up the explosives you still need someone to provide the spark,” he said. “And I remain of the view that ... it was the Germans alone whose plan for war made diplomacy [in July 1914] no longer possible.”

A great achievement of this memorial year is the eight-part documentary 14. A €16 million Franco-German co-production, it presents a kaleidoscopic view of the war though 14 ordinary people’s war diaries and letters, with views that run from enthusiasm to foreboding.

Artist Käthe Kollwitz, for instance, was feted as a staunch anti-imperialist and pacifist. But her diary entries, dramatised in 14, show a woman infected by war euphoria who pesters her husband to allow their underage son to enlist. Later, sensing he will not return, she wri- tes to him in her diary: “What will the Kaiser and the Fatherland do when you are all dead?”

This ambiguous, gripping documentary airs later this year on TV3 and BBC.