Europe letter: Prince Philippe has a hard task ahead of him as he steps up to take the throne 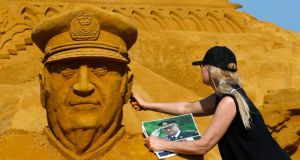 As Brussels begins to wind down for the summer and the city’s thousands of EU employees take their leave from the capital, an altogether different drama is gripping the country.

For months, glossy images of the Belgian royal family have peered out from the many press shops and libraries that dot Brussels’s street corners, as a paternity scandal involving King Albert II has resurfaced.

Two weeks ago, the king took his 11 million subjects by surprise by announcing his intention to abdicate in favour of his son, Prince Philippe (53). On Sunday, hundreds of thousands are expected on the streets for a day of celebratory events, beginning with a morning Te Deum in the city’s 10th-century cathedral, and ending with a celebratory party in the Parc de Bruxelles.

Albert is the second European monarch in recent months to vacate his throne, following Queen Beatrix of the Netherlands’s abdication in April. But while the Dutch queen followed her mother and grandmother’s example in stepping down, 79-year-old Albert is the first Belgian king to voluntarily resign.

Announcing his decision in a live television broadcast earlier this month, the visibly weak king said his age and health prevented him from continuing with his duties.

But many suspect the real reason is a paternity scandal which has dogged the monarch for more than a decade. The rumour that King Albert had fathered a daughter first surfaced in a 1999 biography of Albert’s wife, Queen Paola, written by Dublin-based writer Mario Danneels, a then 18-year old Flemish student.

Paternity claim
The child was later revealed to be Delphine Boël, the English-educated daughter of Belgian aristocrat Sybille de Selys Longchamps. Earlier this year, the issue resurfaced when 45-year-old Delphine launched legal proceedings against the king in a bid to prove her lineage.

Her mother broke her silence last month, in an interview with Le Soir, Belgium’s main French-language paper, revealing details of her 18-year affair with the married king, and voicing her support for her daughter’s legal case. While the king has never commented on the reports, he has admitted to problems in his marriage.

The surprise abdication of Albert has unsettled Belgium, a country which only recently emerged from a constitutional crisis that left it without a government for a record 541 days.

While modern Belgium’s monarchs have traditionally held a largely ceremonial role in the country’s constitutional monarchy system, Albert had played an increasingly active part in political life, acting as a mediator in the recent political impasse. In a divided country, he has become something of a unifying force.

Anchoring a polarised country will be the main challenge for his successor, Prince Philippe. The recent electoral crisis that left Belgium in the hands of a caretaker government for more than 18 months encapsulated a cultural and social divide that raised real questions about the future survival of Belgium as a national entity.

The political impasse arose after the February 2010 general election failed to produce a winner, and left the six main parties squabbling to form a government. In December 2011, Elio di Rupo, Belgium’s first openly gay and French-speaking prime minister, emerged as the leader of a coalition government, but Belgium’s biggest party, the New Flemish Alliance (NVA), opted out.

Led by the outspoken Bart de Wever, the NVA is a rising political force, polling strongly in last year’s local elections. The NVA is the main political vehicle for Flemish separatism, which aims to split Dutch-speaking Flanders from its French-speaking neighbour in the south of the country, Wallonia.

While Belgium’s unique melange of Flemish and French-speaking culture has long been a hallmark of its identity, the 18-month political stalemate indicated a more serious polarisation.

Flanders vs Wallonia
Traditionally, French-speaking Wallonia was wealthier than its northern neighbour, bolstered by a vibrant coal and steel industry, but its economic strength has been eclipsed by Flanders in recent decades.

The divisions – and increasingly secessionist politics emerging from Flanders – have been entrenched by linguistic and educational divides. Belgium, already home to a strongly regionalised system of government, operates separate school and university systems, as well as different media channels, for its two main communities.

Political tensions are likely to resurface with general elections scheduled for May. The incoming monarch, Prince Philippe, is unpopular in Flanders, and the NVA has already indicated its reluctance to participate in government unless its demands are met. With the NVA likely to poll strongly, bridging the gap between the country’s main political parties is likely to be the biggest test for Belgium’s incoming king.