A war that has not ended

The first World War started a century ago on Monday. In one of the first towns to be attacked, at the start of a battle that Irish soldiers fought in, the scars still run deep 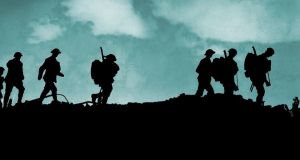 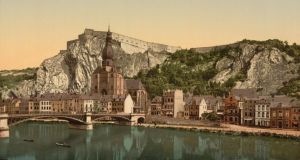 Pretty fort town: a postcard of Dinant printed around 1900. Photograph: Library of Congress 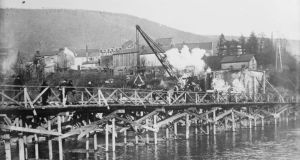 Battle scarred: as the Belgian town looked after the German army bridged the river there, early in the war. Photographs: Bain/Library of Congress 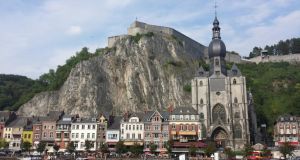 Driving along the quiet, secluded roads of southern Belgium, the towns of Liège, Dinant and Namur chequer the landscape, stopping points on the roads leading towards France, Luxembourg and Germany.

On Monday, heads of state from around the world, including President Michael D Higgins, the king of Belgium and the president of Germany, will gather in Liège to mark the outbreak of the first World War. Although the atmosphere is expected to be one of sombre commemoration and reconciliation, for many living in the area the question of how to commemorate a war whose scars still run deep is more complex.

As Paul Breyne, the director of the Belgian government’s commemorative programme, explains, finding a common vision of the war is not always easy. “There’s a phrase in French, la couche mémoriale. It means there is a history and then there is the memory of the history.”

The four-year conflict, which began 100 years ago on Monday, left a continent shattered and contained the seeds of another war, two decades later. Much of the fighting of the first World War took place in Belgium, and it was a key setting in the opening weeks.

A century on, the dominant image of the conflict is of trench warfare. By late 1914 the Western Front, running from the North Sea to Switzerland, had begun to take shape, and the conflict quickly slipped into stalemate and defence.

A spiral of loss, in which huge battles were fought for the sake of a few kilometres of ground, became the recurring pattern of the Great War. The Battle of Passchendaele, in which up to 500,000 men died in the autumn of 1917 as the Allies advanced eight kilometres into enemy territory – only for Germany to regain the ground five months later – illustrates the tactics’ failings.

But the opening months of the conflict represented a more traditional war of movement and conquest.

The Battle of Liège, 50km from the German border, was the first set-to, when German troops entered the pretty fort town on the banks of the River Meuse.

Germany had long intended, in the event of war, to invade Belgium as a prelude to attacking France from the north. This was a cornerstone of the Schlieffen Plan, drawn up by the German general Alfred von Schlieffen in 1905, should Russia mobilise its forces on the German border.

On August 4th German troops crossed into Belgium at six points on the border and headed for Liège. The town was ringed by 12 armed forts that had been constructed near the town in the late 19th century. Germany aimed to take the town in three days, but it took 11 days and ferocious shelling for Liège to fall. The fortress town of Namur fell on August 25th, after a five-day siege.

The attacks on the Belgian “martyr” towns in the early weeks of the war prompted wide condemnation and helped galvanise support for the war in Britain and the US.

The picturesque town of Dinant, which nestles in a valley on the edge of the Ardennes, between Liège and the border with France, witnessed one of the earliest civilian atrocities of the war. In late August 1914 German troops killed 674 of its people, many of them women and children, shooting them against a wall. Reminders of this episode are still in evidence in Dinant.

In the run-up to the commemorations the feeling seems to be not of reconciliation but of lingering resentment. Huge placards around Dinant show sepia photographs of the town lying in ruins, with the caption “Dinant: Ville Martyre, 1914-2014”.

Close to the courthouse is a bronze memorial depicting a shrouded soldier and a widowed woman and her children, with a stark inscription to the “674 Dinant martyrs, innocent victims of German barbarity”. In 2001 a German minister for defence attended a ceremony in the town at which he asked forgiveness from the people of Dinant.

Today a German flag flies from the bridge in the town, alongside other flags of the European Union, as part of a local festival celebrating Adolphe Sax, inventor of the saxophone, who was born in the town in 1814. But the wounds of war have not completely healed. A film released early this year, Three Days in August 1914: The Walls of Dinant, juxtaposes interviews with descendants of the victims with photographs and reports from the time. It demonstrates the way the psychological legacy of the atrocities still shapes the present.

In Britain, bookshops are filled with displays of books on the Great War, and exhibitions and readings on the theme of war are ubiquitous. In Belgium, the response has been more understated.

The challenge of commemoration is also shaped by the contemporary divisions within the country, between Flemish-speaking Flanders, in the north, the site of most of the bloodshed of the Western Front, and French-speaking Wallonia, in the south, where the war began.

Monday’s event in Liège will be matched by a similar event in Ypres in October. As Paul Breyne of the commemorative programme says, “Different regions, like different countries, have different interpretations of the war . . . Every family in Belgium has its own history of the war. My own family were refugees who fled to Normandy. Ensuring that the commemorative projects are historically correct is very important for us.”

Belgium is not the only country with mixed feelings about the war. Ireland has only slowly come to terms with the role of its people in the conflict.

Farther west from Dinant, towards the French border, is the town of Mons, where the President will attend a commemoration, at St Symphorien Military Cemetery, along with the British prime minister, to mark the first British battle of the war, which began on August 23rd.

The Battle of Mons had a strong Irish dimension. The Royal Munster Fusiliers, the Royal Irish Regiment and the Connaught Rangers were among the wave of British troops sent to the Continent in the first weeks of war. The battle ended in defeat for the Allies. About 1,600 troops from the British Expeditionary Force died, among them Maurice Dease from Westmeath, one of the first soldiers in the war to be awarded the Victoria Cross for bravery. As the Germans attacked, Lieut Dease, who was responsible for defending a crossing on the Mons-Condé Canal, continued to man the machine gun as his men fell around him, crawling towards the enemy to retrieve a second gun despite being wounded.

His family received conflicting information about him in the weeks after the battle, finally learning that he had died on the battlefield after being shot a number of times.

Lieut Dease is buried in St Symphorien cemetery. A small, leafy graveyard, it is different in style and atmosphere from the great, symmetrical cemeteries in western Flanders, where tens of thousands of men who died in the trenches are interred. St Symphorien, the only graveyard in which both Allied and German soldiers are buried, includes a number of graves of Commonwealth soldiers, including from Ireland.

Last November Ireland’s Ambassador to Belgium participated in the Armistice Day ceremony there for the first time.

is varied and complex. Two hundred thousand Irish men are believed to have served in the conflict – between 25 and 30 per cent of all those eligible for recruitment enlisted, according to the Irish author and historian Neil Richardson, in his book A Coward If I Return, A Hero If I Fall.

A number of commemorations are planned around Ireland this year to mark the country’s involvement in first World War, beginning with this week’s unveiling of a Cross of Sacrifice at Glasnevin Cemetery.

The commemorative programme of the Irish Embassy in Belgium is likely to culminate in 1917 with events to mark the centenary of the Battle of Messines, at which soldiers from the Ulster and Irish divisions fought side by side.

As Ireland debates the sensitive politics of commemoration, similar debates are taking place in Belgium, and across Europe and the world, as countries attempt to interpret the events of 1914-18 and assess their place in them. Monday’s commemoration in Liège, at which more than 50 countries will be represented, will be a form of collective response to the horror and sacrifice of the first World War.

As the international community focuses with increasing concern on Ukraine and the Middle East, and on a potential new rift between the West and Russia, the lessons of 1914 have never seemed clearer. The politics of war a century ago still resonate today.