A surge of anti-EU populism in campaign

World View: Sixty per cent of voters tend not to trust the EU 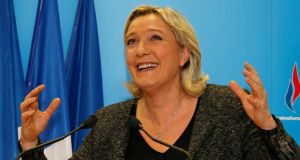 ‘Marine Le Pen and Geert Wilders recently have agreed to form a continental anti-European alliance aimed at wrecking the EU from within.’ Photograph: Benoit Tessier/Reuters

As we cast our ballots in the European elections in 20 days’ time the chances are that most of us will not be asking ourselves the question “whither Europe?” and then voting as our response to that question dictates. Domestic preoccupations, rage against the government, water charges, the property tax, jobs . . . anything but Europe is likely to be on our minds.

To paraphrase Trotsky’s dictum about war, however, you may not be interested in Europe, but Europe is interested in you. The Irish election takes place in the context of a broader Continent-wide election which is probably more important than any in recent years in setting the EU’s direction politically and economically and the depth of its future integration.

The context is also of rampant disillusionment with the EU among Europe’s voters, 60 per cent of which “tend not to trust” the EU now, against 32 per cent in 2007; in 20 of the 28 member-states a clear majority feels the EU is going “in the wrong direction”.

Domestic issues
In part that’s because the parliament has more powers than ever and has been in the mood to use them in tussles with the member states. And specifically in this election over the presidency of the Commission. In part also because of the stronger than ever blowback effect of European elections on domestic politics. EU elections have become domestic elections.

Nowhere is that more evident than in the UK where two polls in recent weeks have put Nigel Farage’s Ukip, a party with no seats in Westminster, in poll position and set to take 30 per cent of the vote and up to 20 of the UK’s 73 MEPs. Its rise is transforming British politics, dragging promises of a referendum out of Cameron and immigration curbs, and scaring the living daylights out of his backbenchers.

The surge of anti-EU populism, and anti-austerity, anti-immigrant and anti-establishment politics on the left and right is the most striking feature of the election campaign, EU-wide polls show.

Many of such parties are for the first time topping national polls: France’s Front National is on about 24 per cent; Denmark’s anti-immigrant Danish People’s Party is ahead on 27 per cent; Austria’s Freedom Party (FPO), which campaigns against “Islamisation”, is set for 20 per cent of the vote; Geert Wilders’ anti- EU, anti-Islam Freedom Party (PVV) was leading in the Netherlands until a recent self-inflicted wound.

In Italy the anti-establishment Five Star movement led by Beppe Grillo and the ultra-nationalist Lega Nord are set to capture up to 30 per cent of the vote. In Germany the Eurosceptical Alternative für Deutschland will take seats. Neo-Nazis in Hungary (Jobbik on 20 per cent) and Greece (Golden Dawn – 7 per cent) look set to do well.

The Open Europe (OE) think tank estimates on the basis of aggregated polling that these parties could collectively win as much as 30.9 per cent of the vote Europewide, up a fifth from 2009 – the likely gains from its current 35 seats to 50 for the leftwing GUE/NGE (the Irish Socialist Party and Sinn Féin are members) are particularly noteworthy.

The European Parliament’s own aggregation of national polls puts the hard right and hard left votes on 5 per cent each, with 5 to 6 per cent further likely to go to explicitly Eurosceptical parties – a total for the admittedly deeply divided anti-integrationists of up to 20 per cent. Large sections will certainly not work together – the GUE/NGE group cannot stomach the nationalist, anti-immigrant right. And while Marine Le Pen and Geert Wilders may recently have agreed to form a continental anti-European alliance aimed at wrecking the EU from within, and other hardline nationalists such as Italy’s Lega Nord, Austria’s FPO, Vlaams Belang in Belgium and the Swedish Democrats may well join them, several more moderate parties will not go near them.

Informal arrangements
The Europe of Freedom and Democracy group – which includes Ukip – will almost certainly reform and expand.

Parliament will still however continue to be dominated by parties that favour the status quo or further integration – the European People’s Party (EPP – to which Fine Gael is affiliated), the Socialist and Democratic group (S&D – Labour) and the Liberals (ALDE – Fiannna Fáil) – in slightly smaller numbers . But to control the parliament’s agenda those parties will be forced increasingly into informal coalition arrangements with each other.

The seats held by parties characterised by OE as “critical reformers” – thosesuch as the Tories who believe the EU needs fundamental reform if it is to survive – is likely to be squeezed from 53 to 39 seats.