Diverted Turkish Airlines flight given all clear in Canada 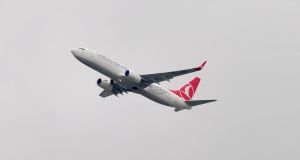 No explosives were found on board a Turkish Airlines flight bound for Turkey that was forced to divert to Halifax in Canada after a bomb threat, Canadian police said on Sunday. File photograph: AFP/Getty Images

No explosives were found on board a Turkish Airlines flight bound for Istanbul from New York that was forced to divert to Halifax in Canada after a bomb threat, Canadian police said on Sunday.

“Completed search of Turkish aircraft & luggage, no explosive device found,” the police force tweeted before adding that the investigation into the threat was ongoing.

The aircraft has resumed its journey to Istanbul.

The threat was received at 10.50pm on Saturday evening.

The Halifax airport tweeted the transfer of the 256 passengers and crew on the flight to the terminal went smoothly and all were safe.

The airport tweeted that the flight was bound for the Turkish capital of Ankara, while the RCMP had initially tweeted that it was headed to Istanbul.

It was at least the second time in the past week a flight leaving the United States was diverted to Canada after a threat.

Two Air France flights bound for Paris from the United States were diverted for several hours on Tuesday following anonymous bomb threats. One of the flights, which had left Washington, was diverted to Halifax, but no explosives were found.

Security officials have been on high alert since Islamic State militants claimed responsibility for attacks this month in Paris that killed more than 100 people. Russia has said the group was also responsible for the downing on October 31st of a plane returning to St. Petersburg from the Sharm al-Sheikh resort in Egypt.

Meanwhile, Singapore Airlines said on Sunday a bomb threat was issued over one of its flights which originated from San Francisco and landed safely at Singapore’s Changi Airport on Sunday.

The airline, in a statement, did not provide any details of how the threat came to light or what action was taken to ensure the flight’s safety. It said the matter had been referred to the authorities.

“We regret we are unable to provide details as it concerns security,” the airline statement said.

Singapore police said in a statement they had conducted security checks and nothing suspicious was found on the plane or among its passengers.