Cubans hope for end of blockade on back of Obama visit 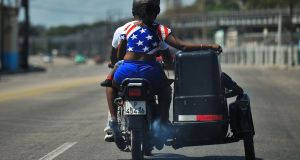 A woman sports a T-shirt in the livery of the US flag while riding pillion on a motorcycle in Havana. Photograph: Getty Images

“It’s the hardest thing in the world,” says Yamis Lidbring (35) of trying to afford nappies for her five-month-old son, Jason Alexander.

Her baby sits on her lap in the government food ration store in Havana’s decaying Old Town. She has just crossed a cavernous pothole running down the street while clutching her baby to reach the shop .

“If he has come to fix any problems, he is welcome,” said the mother of two of Barack Obama, the first US president to travel to Cuba in 88 years, on his historic three-day trip to the communist island nation.

“¿Qué bolá Cuba?” Obama tweeted from Air Force One as he landed in Havana on Sunday, using Cuban slang for “what’s up?”

“Just touched down here, looking forward to meeting and hearing directly from the Cuban people.”

What’s actually up is the price of food and the inability of everyday Cubans to buy it. All Lidbring, the head of housekeeping at a Havana hotel, and most other women wandering around the city that spoke to The Irish Times yesterday want is access to cheaper food.

The ration store that she sits in, which covers several city blocks of Havana, distributes a half-pint of cooking oil, seven pounds of rice, three pounds of sugar, 10 ounces of any beans and 13 cartons of fruit compote for babies. This supply has to last Cubans one month.

You can buy produce outside of rationing but, for Lidbring, 30 nappies costs the equivalent of €13. The average monthly wage in Cuba is about €10.

“It is a long time since a president was here,” she says. “It is a surprise that he wants to come and wants to fix relations but I would like him to fix everything because everything here is too expensive.”

“He is a very good person,” said Pablo Alboran, sitting on the other side of the entrance from Lidbring. “He can be here any day he wants.”

“I want everything to get fixed; I don’t want to think about politics,” said Lucia Perez, who runs the ration store, in between cooing baby Jason whom she has taken from his mother to hold for a while.

One of the contradictions of this legacy-building trip for Obama, one of the landmark achievements of his foreign-policy agenda, is that the US president has travelled to Havana to promote business relations between the US and Cuba. Yet this can only ever be trimming around the edges. A trade embargo in place since Dwight Eisenhower was in the White House has to be repealed by the Republican-controlled Congress and it is refusing to endorse a deal with the regime of Raul Castro that oppresses free speech, dissidents and open elections.

In the 15 months since Obama announced the restoration of diplomatic ties between the US and Cuba, his officials have passed various administrative measures including agreements to open up air routes between the two countries.

The sight of his own plane, Air Force One, descending to José Martí International Airport over the battered powder blue 1950s Buicks and Chevrolets of Havana marks a diplomatic moment that few could have expected just two years ago, but it is just the symbolic start of a long ascent. In an interview with ABC News on Sunday, Obama promised that “change is going to happen” on the island.

“The time is right,” he said. “Obviously our intention has always been to get a ball rolling, knowing that chance wasn’t going to happen overnight. We felt that coming now would maximise our ability to prompt more change.”

Theresa Alonso (59), a worker in the Cuban ministry for internal commerce that oversees the distribution of government food to local shops in Old Havana just a few metres from the ration store, hopes the business deals that Obama and Castro are agreeing will help everyday Cubans.

“He is fighting for us Cubans to take away the blockade” – the word Cubans use for the trade embargo – “and to help the conditions, to help Cubans and help with the rebuilding,” said Alonso of Obama.

Maria Theresa Triana (74) remembers what life was like before Fidel Castro seized power in 1959, two years before Obama was born.

“We had everything – food, very nice coffee, special meat shops; there was everything. The hardest thing to get now is beef and coffee,” she said. “Everything was very cheap then. I ask God that it will come back.”