Coronavirus: WHO chief in quarantine after close contact with positive case 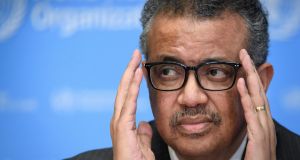 The director-general of the World Health Organisation has said he is isolating after being identified as a contact of someone who tested positive for coronavirus.

Tedros Adhanom Ghebreyesus said he was “well and without symptoms” but would still self-quarantine “over the coming days, in line with WHO protocols” and would work from home.

“It is critically important that we all comply with health guidance. This is how we will break chains of Covid-19 transmission, suppress the virus, and protect health systems,” the 55-year-old wrote on Twitter.

“My WHO colleagues and I will continue to engage with partners in solidarity to save lives and protect the vulnerable. Together!”

Last month he criticised world leaders who have undermined scientists during the pandemic.

“A pandemic is not a political football. Wishful thinking or deliberate diversion will not prevent transmissions or save lives.

“What will save lives is science, solutions and solidarity.”

It comes as global fatalities topped 1.2 million, after the deadliest week for the pandemic since April. Daily cases are surging, with the US seeing a bigger wave than in the spring as it approaches Tuesday’s election.

As crowds at the Miami Opa-Locka airport chanted “Fire Fauci”, Mr Trump allowed the chants to continue for several seconds before responding: “Don’t tell anybody, but let me wait until a little bit after the election. I appreciate the advice. I appreciate it.”

Mr Fauci, one of the world’s foremost infectious diseases experts, has served for over three decades as the director of the National Institute of Allergy and Infectious Diseases (NIAID).

He is one of the lead experts on Mr Trump’s coronavirus taskforce and has frequently offered frank public health guidance in contrast to the president’s repeated falsehoods on the severity of the Covid-19 pandemic.

Mr Trump’s rally in Florida, a critical swing state he needs to hold to win the election, was held as Covid-19 cases in the state continued to surge. Like countless Trump campaign rallies there was no social distancing and thousands of attendees did not wear face masks.

Miami-Dade county, where the event took place, has a midnight curfew to mitigate the spread of the virus. The county ordinance states the curfew is “necessary to safeguard life and health, as parties and gatherings late at night have the potential to spread Covid-19”. Trump’s speech continued well past midnight and attendees were still leaving the venue after 1am.

More than 9.2 million have tested positive for coronavirus in the US and more than 230,000 people have died, according to Johns Hopkins university.

The U.S. added 78,157 new cases on Saturday, after two straight days of national records that pushed the daily case count near 100,000. The 0.9 per cent rise matched the average daily increase of the previous seven days, according to data compiled by Johns Hopkins University and Bloomberg.

North Dakota, ranked with the U.S.’s biggest outbreak per capita, recorded a fourth day with cases more than 1,000. The state reported 1,128 new infections Sunday, a day after hitting a record, as hospitalizations continued to tick up. Health officials have warned the medical system is being overwhelmed

A month-long partial lockdown announced by British prime minister Boris Johnson late Saturday might have to be extended if it fails to contain the spread of the coronavirus, cabinet office minister Michael Gove said.

Mr Johnson said the new restrictions would come into effect on Thursday as virus cases spike and government scientists warn the health system faces being overwhelmed. All but essential shops will close, as will restaurants and bars, though schools and universities will remain open.

State payments to furloughed workers will cover of as much as 80 per cent of their wages through the new lockdown period, Mr Johnson said.

Infections rose by more than the seven-day trailing average in France, which has accumulated the most cases in Europe. The rate of positive Covid-19 tests, a gauge of the pandemic’s spread, increased to 20.4% in Sunday’s data from 20.2% a day earlier, according to national health agency data.

Two days after a nationwide limited lockdown went into effect, France reported 46,290 new cases, more than the average of about 42,000 a day over the previous week. An additional 231 people died from virus-related illness, bringing the toll to 37,019.

China is doubling down on safeguards to ensure people traveling from abroad do not bring the coronavirus. Statements posted on websites of Chinese embassies in countries including the US, UK, France, Italy and New Zealand over the weekend ask for negative antibody test results in addition to negative results from nucleic acid tests within 48 hours of boarding flights.

The requirement for double negative results will be effective on November 7th, according to the statements.While nucleic acid tests can detect the virus on a sample taken from a person’s respiratory track, there is a chance the result could give a false negative if the viral load where the swab was taken is below the lowest threshold for detection.

An antibody test could indicate that a person is in the acute phase of infection when testing positive for IgM antibody, which is the first wave of antibodies generated to fight infections. – Agencies