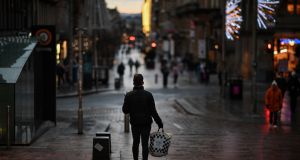 More than 85.23 million people have been reported to be infected by the novel coronavirus globally and 1,847,660 have died, according to a Reuters tally. Here are the latest updates from around the world:

England and Scotland have returned to lockdown measures as the two countries attempt to contain rising levels of coronavirus.

England is now in its third national lockdown after British prime minister Boris Johnson shut schools to most pupils and imposed the toughest restrictions since March.

In a televised address to the nation on Monday evening, Mr Johnson ordered the country to stay indoors other than for limited exceptions and bowed to significant pressure to order primary schools, secondaries and colleges to move to remote teaching for the majority of students from Tuesday.

Schools and colleges in Wales will also remain closed until at least January 18th and move to online learning, while in Northern Ireland — which is already under a six-week lockdown — “stay at home” restrictions will be brought back into law and a period of remote learning for schoolchildren is to be extended.

Mr Johnson said the new variant of coronavirus, which is up to 70 per cent more transmissible, was spreading in a “frustrating and alarming” manner and warned that the number of Covid-19 patients in English hospitals is 40 per cent higher than the first peak.

Mainland Scotland, meanwhile, has returned to lockdown until at least the end of January. The latest restrictions came into effect from midnight in all Level 4 areas of the Scottish Government’s five-tier system and will continue throughout the month.

A legally-enforceable stay-at-home order will apply across mainland Scotland and Skye with people only permitted to leave their home for an “essential purpose”.

This includes essential shopping, exercise, caring for someone, or if you are part of an extended household, while schools will be closed to most pupils until February 1st at the earliest.

Germany could follow the UK’s plan to delay giving a second dose of Covid-19 vaccine to people who have already received a first jab, as frustration at the slow progress of European inoculation programmes continues to mount.

Britain said last week it would prioritise administering a first dose of either the Oxford/AstraZeneca or the Pfizer/BioNTech shot so as to ensure more people were protected sooner, with a second dose coming 11 or 12 - rather than three - weeks later.

While the US has said it will not follow in the UK’s footsteps, it emerged on Monday that Germany’s health minister, Jens Spahn, had asked the country’s disease control agency, the Robert Koch Institute, to investigate postponing a second jab.

The move, which follows widespread criticism that Germany has failed to procure enough supplies of the vaccine and been unable to accelerate its nationwide inoculation campaign, was greeted with enthusiasm by doctors.

Denmark is also looking into extending the gap between jabs. The country’s infectious diseases institute said on Monday it would closely monitor the situation in Britain, with the health ministry reportedly considering a 3- to 6-week interval.

The EU’s collective vaccine procurement programme has come in for fierce criticism, with German tabloid Bild criticising chancellor Angela Merkel’s “silence over the vaccine debacle” and demanding the chancellor explain why a “clearly out-of-her-depth Cypriot EU commissioner” was tasked with such a vital job.

France, meanwhile, is under heavy pressure to accelerate its deliberately cautious vaccination drive. A reportedly furious president Emmanuel Macron met prime minister Jean Castex and health minister Olivier Veran on Monday after it emerged that only 516 people were immunised in France last week.

“It’s going too slowly,” epidemiologist Arnaud Fontanet said, noting that 240,000 people had been vaccinated in Germany during the same period. Le Monde newspaper asked whether France had donned “the European dunce’s hat”.

The French government has adopted a slow, phased approach, starting in care homes, relying mainly on family doctors to administer the shots and requiring advance consultation and written consent, in the face of Europe’s most vaccine-sceptical population.

A poll published on Sunday found that 58 per cent of French people do not want the Covid-19 vaccine, with women more reluctant than men to be inoculated and only 32 per cent of the 35-49 age group happy to have the jab compared with 58 per cent of over-65s.

Experts have said excessive caution risks scaring as many people as it reassures. The government has speeded up its timetable, vaccinating healthcare workers over the age 50 from Monday and saying it will open mass vaccination centres before February.

Japan’s prime minister, Yoshihide Suga, has said the government is considering declaring a state of emergency in the greater Tokyo region amid a sharp rise in coronavirus cases in and around the capital.

Suga, whose handling of the pandemic has seen his approval ratings plummet in recent weeks, has come under pressure to take action to address the recent surge in infections.

At the weekend, the governor of Tokyo, Yuriko Koike, and the governors of nearby Kanagawa, Chiba and Saitama prefectures urged the government to declare a localised state of emergency.

Suga’s administration, however, is reluctant to introduce any measures that could harm the world’s third-biggest economy, which has rebounded after the first state of emergency brought many businesses to a standstill due to sharp falls in shopping and spending on travel and entertainment.

His predecessor, Shinzo Abe, declared a state of emergency in Tokyo and several other parts of the country in April that was later expanded nationwide during the first wave of Covid-19 infections.

Concern is mounting that record cases in Tokyo will soon place an unmanageable strain on the city’s hospitals.

The city reported a record 1,337 cases last Thursday; on Sunday, the number of people with severe symptoms rose to 101, just four fewer than the highest total seen in late April.

Tokyo is by far the worst affected of Japan’s 47 prefectures, and, along with three neighbouring prefectures, accounted for more than half the nationwide total on Sunday.

Tokyo alone accounted for 816 of the 3,100 new infections reported in Japan on Sunday, bringing the city’s total caseload to 62,590.

The programme will launch in Jakarta, with president Joko Widodo set to be given the first shot, Budi Gunadi Sadikin said in a statement, while vaccinations in other regions will start in the following two days.

The government has previously said 1.3 million frontline workers are due to be among the first to receive the vaccines made by China’s Sinovac Biotech. Indonesia has received 3 million doses of the Sinovac vaccine, named CoronaVac .

After health workers had been inoculated, regional governors should come forward to be given the vaccine “to generate confidence in the community,” said Budi.

Minister Budi has said previously that Indonesia must inoculate 181.5 million people, or roughly 67 per cent of the population, to reach herd immunity.

Mexico has approved the Oxford-AstraZeneca coronavirus vaccine for emergency use, hoping to spur a halting vaccination effort that has only given about 44,000 jabs since the third week of December, about 82 per cent of the doses the country has received.

The Pfizer vaccine had been the only one approved for use in Mexico, until Mexican regulators approved the AstraZeneca vaccine on Monday.

Foreign relations secretary Marcelo Ebrard wrote on Twitter that “the emergency approval for the AstraZeneca vaccine is very good news ... with this, production will begin very soon in Mexico!”

A Mexican firm has arranged to do part of the finishing and packaging of the vaccine.

Mexico has pinned much of its hopes on the inexpensive, one-shot CanSino vaccine. “It will makes things a lot easier for us,” Mr Lopez-Gatell said.