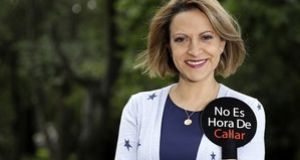 The Golden Pen of Freedom, the annual press award of the World Association of News Publishers, has been awarded to Colombian journalist Jineth Bedoya Lima for her work in promoting the rights of women affected by political violence in her country.

Bedoya Lima, a 2016 Nobel Peace Prize nominee, has reported on the armed conflict in Colombia as well as drug trafficking and gender issues over two decades.

Currently a deputy editor for Colombia’s El Tiempo newspaper, she is recognised as one of the leading voices in denouncing sexual violence against women.

In 2000, Bedoya Lima went to La Modelo prison in Bogotá on assignment for El Espectador newspaper to investigate alleged arms sales between paramilitaries and state officials. While there, she was kidnapped, tortured and sexually assaulted by three paramilitaries.

During the attack, one of the perpetrators told her: “Pay attention. We are sending a message to the press in Colombia.”

She was again kidnapped in 2003, while working for El Tiempo, this time by the Farc, who held her for five days.

“Working for press freedom is one of the greatest commitments that a media outlet and a journalist can have and being awarded the Golden Pen of Freedom is also recognition of the tireless fight against impunity that dozens of journalists face around the world,” Bedoya Lima said in accepting the award.

Warren Fernandez, president of the World Editors Forum, said that in speaking truth to power, and in the pursuit of justice, Ms Bedoya Lima represents “the very best of our profession”.