Christians most persecuted and discriminated against worldwide

Most violations of religious freedom occur in Muslim countries 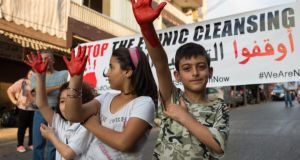 India is the latest country in which Christians have spoken out about their persecution. Christians of all denominations have issued a joint pre-Christmas statement in which they speak of “violence against our churches in various parts of the country, especially in Chhattisgarh, Madhya Pradesh, Odisha, Uttar Pradesh and now in the territory of the capital city Delhi”. This, they said, was a “well organised campaign, also by senior members of parliament belonging to the ruling party”.

In the Middle East it has been estimated that at current rates of decline due to persecution, Christian numbers will halve over the next five years.

This year has seen more global persecution of Christians than any other in recent history. According to the International Society for Human Rights, a secular group with members in 38 states worldwide, 80 per cent of all acts of religious discrimination today are directed at Christians.

It gets worse. The US Center for the Study of Global Christianity has estimated that 100,000 Christians die every year because of their faith, while the Washington-based, non-partisan Pew Research Center has said that Christians today face some form of discrimination in 139 countries – almost three-quarters of the world’s nations.

There are Christians in jail for blasphemy in Pakistan. Churches are being burned and worshippers slaughtered in Nigeria and Egypt, which has seen its worst anti-Christian activity in recent years.

Persecution of Christians in China is said to be on the increase and in North Korea a quarter of Christians live in forced labour camps for refusing to join the cult of the state’s founder Kim Il-sung.

North Korea tops the 2014 list of 50 countries worldwide where persecution of Christians for religious reasons is believed to be worst. That list, compiled by the Christian non-profit Open Doors organisation, gives the current top 10 such countries (in reverse order) as Yemen, Iran, Pakistan, the Maldives, Saudi Arabia, Afghanistan, Iraq, Syria, Somalia, and North Korea.

Open Doors has produced some particularly shocking statistics on Christian persecution. It estimates that 322 Christians are killed every month because of their faith, 214 churches and properties are destroyed, and more than 772 forms of violence against Christians take place.

According to the United Nations Human Rights Commission, although Christians make up less than 5 per cent of the Iraqi population, they account for 40 per cent of refugees there.

Last July more than 3,000 Christians fled Mosul in Iraq, one of the oldest Christian cities in the world, in advance of Islamic State forces who demanded they convert or be executed. A little more than a decade ago, Mosul had 60,000 Christians.

About 40 per cent of Christians have left Syria since the start of the civil war there three years ago.

The past decade has been turbulent for Christians in most Arab countries. Egypt’s revolutions and counter-revolutions have been accompanied by riots against Coptic Christians, with murders and church burnings.

In Gaza and the West Bank, Palestinian Christians have been emigrating en masse to escape the effects of Israel’s pro-settler policies and the reaction of their increasingly fundamentalist Sunni Muslim neighbours.

Last month Britain’s Prince Charles said it was “an indescribable tragedy that Christianity is now under such threat in the Middle East, an area where Christians have lived for 2,000 years and across which Islam spread in 700 AD, with people of different faiths living together peaceably for centuries”.

He was speaking at the launch of a report by Catholic charity Aid to the Church in Need, which found that religious freedom had deteriorated in 55 of the 196 countries it studied over recent months.

It too found that Christians are the most persecuted religious minority in the world, while Muslim countries predominated among states where the most serious violations of religious freedom occurred.