Precautionary tsunami alert along coast and in neighbouring Peru called off 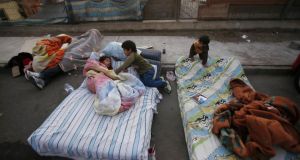 Children sleep in the open in an elevated area in the city of Iquique, northern Chile, in expectation of further tremors this week. Photograph: Felipe Trueba/EPA 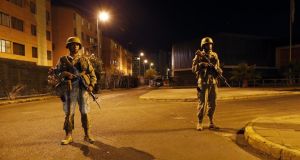 Soldiers patrol to stave off potential looting during an evacuation towards higher zones in the city of Iquique, northern Chile, last night. Photograph: Felipe Trueba/EPA

A powerful 7.6-magnitude earthquake struck off northern Chile late yesterday in the wake of the fatal major quake on Tuesday, but there were no reports of damage and a precautionary tsunami alert along the coast and in neighbouring Peru was called off.

It was the strongest of several aftershocks that followed the 8.2-magnitude quake blamed for six deaths in the same region on Tuesday.

Chile’s emergency office Onemi said there were no initial reports of casualties or serious damage from the latest quake.

President Michelle Bachelet, who had gone to the area to inspect the damage from the earlier quake, was evacuated from her hotel in the city of Arica.

“I was evacuated like all the citizens and we have come here (to Arica’s emergency office) to see if there is any way we can help,” she said late last night.

The area is home to many of the biggest mines in Chile, the world’s top copper producer.

A spokeswoman for Glencore Xstrata’s and Anglo American’s Collahausi mine said the “process of normalisation” it was following after Tuesday’s quake was continuing without problems.

Other mines could not immediately be reached for comment, but they were generally unaffected by Tuesday’s stronger quake.

Chile’s arid, mineral-rich north is sparsely populated, with most of the population concentrated in the port towns of Iquique and Arica, near the Peruvian border.

The new quake was located 12 miles (19 km) south of Iquique at a relatively shallow depth of 12.4 miles (20 km), the US Geological Survey said.

The Pacific Tsunami Warning Center said while there was no widespread tsunami threat, the latest tremor could generate a local tsunami.

The ports of Iquique, Arica, Patache and Tocopilla remained closed early on Thursday. Some of them ship metals, suggesting exports and trade flows may be disrupted.

The bigger earthquake on Tuesday triggered a tsunami with 2m (7ft) waves and officials said it caused six deaths.

More than 2,600 homes were damaged and fishing boats along the northern coast were smashed up. However, most infrastructure held up.

Chile is one of the most earthquake-prone areas of the world. In 1960, southern Chile was hit by a 9.5 quake, the strongest in modern history.

Ms Bachelet, who was sworn in as president less than a month ago, is conscious of the stinging criticism she faced near the end of her first term in office in 2010, when her government was seen to have responded inadequately to a massive 8.8-magnitude quake and tsunami that killed 526 people.

Residents in the area of the latest quakes have been expecting “the big one” for many years. The Nazca and South American tectonic plates rub up against each other just off the coast of Iquique, where a “seismic gap” has been building up.

An unusually large number of tremors in the area in recent weeks had led authorities to reinforce emergency procedures, while residents bought rations and prepared for an eventual evacuation.

However, the mega-quake they had been fearing may still be yet to happen, said Paul Earle, a seismologist at the US Geological Survey National Earthquake Information Center.

“[Tuesday’s] earthquake was not large enough to release the stress on the whole area where they believe the seismic gap is,” he said earlier yesterday. “It’s going to take some time to evaluate the effect of this earthquake on that region. But people should stay prepared.”