Winston Churchill name-checked in Belfast as clock ticks towards Brexit 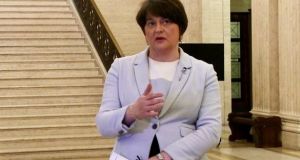 DUP First Minister Arlene Foster said that “to paraphrase Winston Churchill, it is not the beginning of the end but rather the end of the beginning”. File photograph: David Young/PA Wire

The prospect of Northern Ireland, along with Britain, formally exiting the European Union around the bewitching hour on New Year’s Eve was a cause for considerable recrimination in the North as the clock ticked to that historic midnight moment.

Even the DUP, which campaigned for Brexit, had little to celebrate; instead bewailing how Boris Johnson in finally achieving his farewell to the EU had created a border in the Irish Sea.

There was talk too of how quitting the EU may embolden those nationalists seeking to depart the closer union of Northern Ireland and Britain.

The Northern Assembly held a special meeting on Wednesday to discuss the impending parting of the ways. Some DUP MLAs attempted to put a little gloss on proceedings but all told it was a dispiriting three-hour political debate in which Winston Churchill was name-checked several times, and from different Brexit points of view.

Arlene Foster said that “to paraphrase Winston Churchill, it is not the beginning of the end but rather the end of the beginning”.

Wearing her First Minister’s hat she acknowledged the different political views on Brexit while hoping that “ultimately, our focus must be on working together to support our businesses and communities”.

Switching to her DUP leader’s headgear she complained how the British government’s Northern Ireland protocol had created that Irish Sea Border, a protocol which her party rejected and unsuccessfully opposed.

Ulster Unionist Party leader Steve Aiken requested an intervention, surely to say to her, “we told you so”, but Ms Foster was not for giving way.

When he did get his speaking chance Mr Aiken lamented that Northern Ireland would be a “place apart” due to the protocol.

Alliance’s economy spokesman Stewart Dickson, in grieving over Brexit, also cited Churchill with his remark that “if you destroy a free market you create a black market”.

Still, he added: “I am a European, and no one will take that away from me.”

There would be opportunity, predicted Mr Storey.

Sinn Féin health spokesman Colum Gildernew retorted that Churchill “could hardly have meant that you would create the difficulty in order to find the opportunity”.

Sinn Féin MLA Declan McAleer noted the references to Churchill but said he preferred the comments of another senior Tory, Michael Heseltine, who said: “We must welcome the news that Brexit does not end in the chaos of no-deal with the sense of relief of a condemned man informed that his execution has been commuted to a life sentence.”

There was so much Churchill that People Before Profit MLA Gerry Carroll felt compelled to say he would not be quoting the former prime minister and war-time leader because “he was an imperialist butcher who believed that the British Empire was superior to people here and in every country that the British Empire colonised across the world”.

That drew some muttering from the unionist benches although Mr Carroll, like Ms Foster, wasn’t allowing any dissenting interventions from that quarter.

Separately, the Northern Secretary Brandon Lewis gave Zoom interviews to a number of reporters. Asked by The Irish Times about SDLP leader Colum Eastwood’s argument that Brexit could hasten the end of the North’s union with Britain he said he “fundamentally” disagreed with this view.

Like Mr Storey and Winston Churchill, and unlike Mr Gildernew, and unlike most other politicians, he saw opportunity. “Northern Ireland is going to have this phenomenal benefit of being not just part of the UK customs territory and single market, but also that ability to trade freely with the EU,” he said.

Back in the Assembly chamber SDLP MLA Matthew O’Toole took a more depressing view of Brexit. “It is the greatest single act of self-harm in the history of modern states,” he said.