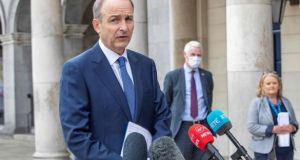 Taoiseach Micheál Martin has spoken to Boris Johnson and set out in “forthright terms” his concerns about the British move to unilaterally walk away from aspects of the withdrawal agreement signed last year, the Government said in a statement this evening.

Mr Martin outlined his concerns to Boris Johnson about the “breach of an international treaty, the absence of bilateral engagement and the serious implications for Northern Ireland”, his spokesperson said.

“He stressed to the prime minister that the UK government should re-engage with EU negotiators urgently.”

Mr Martin told CNN on Wednesday evening that it represented a “new departure” which was “moving away from the norms of conduct and diplomacy”.

“I was annoyed and angry at the fact there was no heads up,” he said.

“The degree to which it drags Northern Ireland back into the centre stage is very, very regrettable. It has the potential to be divisive in that context,” Mr Martin said.

The Taoiseach said the timing and unilateral nature of the admission by Northern Ireland secretary of state Brandon Lewis on Tuesday that new British internal market legislation would breach the Brexit treaty was “not an acceptable way to conduct negotiations”.

Mr Lewis told the House of Commons the internal markets Bill to be published on Wednesday will see Britain reneging on its treaty commitment to the EU.

Mr Martin said the admission in the House of Commons had “taken a lot of people aback” across Europe and indeed within the UK” and was not conducive to meaningful negotiations.

“Unilateral actions which seek to change the operation of measures already agreed including in an international treaty and incorporated into domestic law do not build trust.”

Mr Martin said he was not under any illusion that a no-deal Brexit would be “very damaging” but was of still of the view that the optimal outcome was a “proper, sensible free trade agreement”.

Mr Martin said he had spoken to European Commission president Ursula von der Leyen. On Wednesday she tweeted she was “very concerned” about the announcement which “would break international law and undermines trust”. The EU has requested an extraordinary meeting with British counterparts to discuss the matter.

On Wednesday evening, Minister for Foreign Affairs Simon Coveney said the British government had “decided to cause chaos” in the negotiations by taking actions that were both “illegal and aggressive”.

“I think from a British government perspective, it’s extraordinary,” he told RTÉ News. “Britain’s reputation internationally is going to be seriously damaged by this, and the trust between Britain and the EU in terms of negotiating teams and governments is also going to be strained by it.

“The EU side has responded in a very calm way - as have we - but also a very firm way. The Taoiseach spoke very directly to the prime minister this evening but also has asked for the UK team to engage but in the structures that are there to solve problems like this.

“Hopefully that will be able to happen in the next few days and we will find a way of moving on from this really unnecessary distraction which effectively proposes aggressive and illegal approaches by the UK to try and solve problems that we settled this time last year.”

Mr Coveney said he still believed a deal could be done, but that he could not “allow this pass without calling it out for what it is”.

Mr Coveney warned against the potential for undermining the progress made in Northern Ireland with the reestablishment of the power-sharing government.

“I would caution anyone who is thinking about playing politics with Northern Ireland on Brexit again. Northern Ireland is too fragile and too important to be used as a pawn in the broader Brexit negotiations,” he said.

Earlier in the Dail Mr Martin told Sinn Fein leader Mary Lou McDonald the Government did not just “kneejerk react” when a particular move was made in international negotiations.

He said “I will exercise judgment in terms of both how I intervene, when I intervene and the manner of my intervention. “And sometimes it’s not all about lifting the phone because what’s at stake here is adherence to an international treaty which Ireland’s agreed to.”

Ms McDonald said “perfidious Albion is alive and well and living in number 10 Downing Street” and she was “alarmed” that the Taoiseach had waited three days to intervene on the matter.

Ms McDonald told the Taoiseach “you need to dispense with diplomatic niceties and you need to set the position very very clearly to him”. She said the stakes were very high and they could not afford to have “any hesitancy or lack of forcefulness and rigour in dealing with Boris Johnson”.

She also suggested Mr Martin was “indulging in wishful thinking” that Mr Johnson and his government “are not capable of really walking away from the commitments they have made”.

Labour leader Alan Kelly also called on the Taoiseach to “stand up and call this out for what it is”.

He told the Taoiseach “I don’t trust Boris Johnson. I know you can’t say that” but Mr Johnson would “only react to one thing and that is being called out quite publicly”. Mr Kelly told Mr Martin “you will be doing Europe and the world a favour.”

Earlier, Tánaiste Leo Varadkar said he did not think there could be a free trade agreement between the UK and the EU in circumstances where the UK government is not honouring the withdrawal agreement.

Mr Varadkar said it had been an “extraordinary statement to hear from a cabinet minister in a respected liberal democracy”.

On Wednesday morning, Mr Varadkar said: “A country either abides by the rule of law or it does not, it either honours international treaties and obligations or it does not; Britain is an honest, honourable country full of honest people, it’s the country of the Magna Carta, the country that helped defend parliamentary democracy, it’s not a rogue state.”