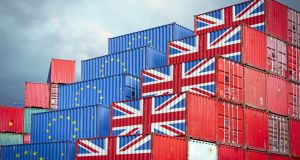 The British government has ruled out any new customs infrastructure at ports on either side of the Irish Sea to implement the post-Brexit Northern Ireland protocol.

In a paper outlining how it will implement the protocol, which was agreed alongside the withdrawal agreement last year, the government also said there would be no requirement for export declarations for goods moving from the North to Great Britain.

“At the heart of our proposals is a consensual, pragmatic approach that will protect the Belfast (Good Friday) Agreement and the huge gains from the peace process. Implementing the protocol in this way will ensure we can support businesses and citizens, and protect Northern Ireland’s place in the UK’s customs territory, while upholding our commitments to the EU’s Single Market.

“Northern Ireland will benefit fully from its access to the UK and EU markets. The whole of the United Kingdom will be able to capitalise on the opportunities that will come from forging our own path and striking new free trade agreements with countries around the world,” cabinet office minister Michael Gove said.

A spokesman for the Tánaiste Simon Coveney said that the Irish government was “studying the UK government statement closely.”

“But the obligations of both the UK and the EU are written in black and white in the legally binding Withdrawal Agreement, while the ambition for the future is laid out in the political declaration,” he said.

Mr Coveney is expected to give further reaction later today.

@MichaelGove believes that NI is as British as Finchley - again the British Government shows a lack of understanding of the unique circumstances here - https://t.co/a673HoTOjK here is a link to the GFA, may be worth giving it a read.

Under the protocol, Northern Ireland remains part of the UK’s customs territory but EU customs rules apply to all goods entering the North unless they are determined not to be at risk of moving on into the EU single market. But the British paper envisages a system that would presume that goods moving from Great Britain to Northern Ireland are destined to remain there.

Mr Gove said that is was important for an approach to be designed which will continue to “command consent”.

Conservative former prime minister Theresa May told the Commons: “Will (Mr Gove) confirm that as from January 1st, 2021, that Northern Ireland — ie a part of the United Kingdom — will be required to follow EU regulations on certain goods until at least 2024 and potentially indefinitely?”

Mr Gove responded: “If the workings of the protocol are viewed by the people and the parties of Northern Ireland as onerous, too much, intrusive and unacceptable, then they have the opportunity to vote them down in 2024, which is why it is so important that we design an approach which can continue to command consent.”

Leader of the SDLP, Colum Eastwood said on Twitter that the British government had shown a “a lack of understanding of the unique circumstances” in Northern Ireland, and included a link to the Belfast Agreement.

Democratic Unionist Party MP Sammy Wilson said the withdrawal agreement and its arrangements for Northern Ireland would “always be offensive to unionists”.

The document acknowledges that more infrastructure will have to be put in place to increase inspections on animals and agrifood but stresses that “there will be no construction at points of entry where no plant or animal health checks are currently carried out”.

The protocol requires manufactured goods on the market in Northern Ireland to satisfy EU regulations but the British document says the same regulatory authorities would continue to enforce the rules.

“The EU have previously noted that any regulatory checks required for industrial goods can take place through market surveillance authorities at business premises or on the market, and do not have to take place at ports. This would be on the basis of risk assessment, which we will look to carefully utilise, both by taking a pragmatic view of the risk posed by goods from Great Britain, and by lowering their risk profile through increased on-the-market activity. Where Northern Ireland traders gain product approvals and certification for the Northern Ireland market from EU authorities and bodies, the UK will recognise those for the purpose of placing goods on the Great Britain market,” it says.

The British document does not offer the detailed commitments to implement the protocol’s requirements that the European Commission requested at the end of last month.

The implementation of the protocol does not form part of Britain’s negotiations with the EU on a free-trade agreement but EU negotiators have stressed its importance as evidence of good faith on Britain’s part. – Additional reporting, PA