Michael Gove in Brussels for talks on Northern Ireland protocol 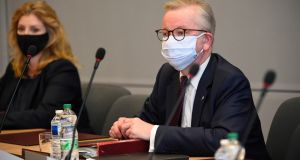 The European Union and Britain started a decisive week of talks on Monday on a new trade deal and implementing their divorce agreement before national leaders assess progress or the risk of a no-deal split on Thursday and Friday.

British cabinet office minister Michael Gove is set to attend a meeting of the joint committee responsible for implementing the Northern Ireland protocol, which his government is threatening to renege on if it does not get its way in negotiations.

The three sticking points in talks so far remain the same: fisheries; state aid rules; and governance or dispute resolution.

An EU diplomat said however that “the mood music was a bit better” after Mr Gove expressed confidence about securing a trade deal.

“It’s high time that negotiations move forward, we need to make progress on issues like the level playing field, fisheries and governance,” the diplomat told Reuters on condition of anonymity.

“The UK still has to restore trust after the Internal Market Bill escalation.”

Mr Gove meets a deputy head of the bloc’s executive Commission, Maros Sefcovic, on Monday in the Joint Committee tasked with implementing the divorce treaty and now looking at the contentious new UK laws.

“We are looking forward to continuing our discussions at the Joint Committee and working towards a satisfactory outcome for both sides,” a UK government spokeswoman said.

Trade talks headed by the EU’s Michel Barnier and the UK’s David Frost resume in Brussels on Tuesday. Lasting until Friday morning and also due to cover energy cooperation and transport, they are the final round of negotiations scheduled so far.

EU leaders meeting in Brussels on Thursday and Friday are expected to authorise more negotiations before their next summit on October 15th-16th.

The EU says negotiators must seal a deal by the end of October or the first days of November at the latest, to leave enough time for ratification by the European Parliament and some national parliaments so a deal can take effect from 2021 when Britain’s post-Brexit transition ends.