Decision allows for holding of pre-Brexit election, and makes clear the sole purpose of the extension is to allow for deal ratification 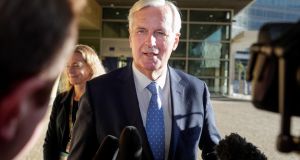 The EU’s chief Brexit negotiator Michel Barnier leaving the European Commission in Brussels for a meeting with EU27 ambassadors to discuss an extension to the Brexit deadline. Photograph: EPA/Stephanie Lecocq

France worked with Ireland, Germany and officials of the European Council over the weekend to frame the terms of another British Brexit extension to January 31st, which member state ambassadors agreed on Monday morning. Without the agreement the UK was due to leave the EU on Friday.

The decision, reached ahead of key votes in the Commons on Monday afternoon, allows for the holding of a pre-Brexit election and made clear that the sole purpose of the extension is to allow for the ratification process to be completed in London and Brussels, and that the content of the Withdrawal Agreement is not open for further discussion.

The declaration “firmly” excludes any reopening of talks in the future.

Sources say that although the council had previously made a similar insistence, and then negotiated changes with Boris Johnson, the member states are determined to concentrate minds in the Commons on the strong likelihood that further extensions are extremely unlikely and that the current deal is as good as it will get.

The UK will be allowed to leave the EU on the first of any month until that date once the Withdrawal Agreement is ratified by the Commons.

Sources close to the Elysee confirmed over the weekend that France’s president Emmanuel Macron had accepted that the increased likelihood of an election in the UK had made his opposition to a three-month extension less tenable.

They said French diplomats had taken the initiative in brokering firmer terms for the extension, and particularly the ruling out of renegotiation.

Formally speaking, the ambassadors set in train the “written procedure” for approval of decisions by leaders in the absence of a full summit. That will happen after the UK signals its acceptance of the extension, likely to be through its ambassador to the EU, and is expected to be completed without difficulty within 24 hours.

The UK had previously been granted an extension to Friday, and is required under the terms of its Benn Act to accept the EU’s offer of an extension to January 31st unless the Commons votes it down.