Clement Beaune, says Paris will not be rushed into deal over the next 48 hours 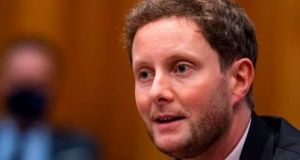 Clément Beaune: ‘It’s necessary to take the time and. at any rate, not to sacrifice our interests under the pressure of a calendar.’ Photograph: Getty

The European parliament’s Sunday deadline may pass without agreement on a post-Brexit trade and security deal, France’s European affairs minister, Clement Beaune, has said, as British and EU negotiators continued to haggle over fishing rights.

MEPs have said they will stage a vote of consent on December 28th if terms are agreed by the two sides by midnight central European time on Sunday, raising the stakes for a weekend deal.

But Mr Beaune, a long-time ally of Emmanuel Macron who speaks for the French president on Brexit, said the French government would not be rushed into a deal over the next 48 hours.

“It would be normal not to say: well it’s Sunday evening so let’s wrap it and sacrifice everything,” he said.

“It may be hard and sometimes tough to understand, but it’s necessary to take the time and, at any rate, not to sacrifice our interests under the pressure of a calendar.”

A deal could still be provisionally applied on January 1st if agreement is found, with parliament holding a vote later in the month, but the European commission is understood to be loath to take such a step.

Such a process would also take up to a week, given the need for the treaty to be translated and scrutinised in the EU’s capitals.

Its chief negotiator, Michel Barnier, told MEPs on Thursday that as a result there may need to be a short period without any trade and security arrangements in place if the talks drag on to Christmas.

With none of the alternatives looking palatable, the EU side is keen to try to wrap up the deal this weekend but the two sides continue to struggle to find a compromise on access to British seas for the European fishing fleet.

The annual turnover from fish in British waters is around €850 million, of which €650 million is taken by EU member states. The prime minister was presented with the latest EU offer of handing over 25 per cent of its catch by value - €162.5 million a year - to UK vessels.

The UK insists that the EU needs to get closer to its demand for 60 per cent of the current catch being repatriated, worth around €390 million a year.

The UK also wants to restrict a phase-in period for the new arrangements to three years rather than the seven most recently proposed by Brussels.

Downing Street is further resisting an EU demand to be able to apply tariffs to British goods in the event of the government closing off access to UK seas at some point after the phase-in period.

About 75per cent of UK fish exports, including the most valuable species such as herring, cod, shellfish, mackerel and salmon, goes to the EU market.

Johnson wants to keep the six to 12 nautical mile zone off the British coast, fished for centuries by French and Belgian vessels, exclusively for UK-flagged boats.

The prime minister called on the EU on Friday to table a deal-making proposal. “Our door is open, we’ll keep talking but I have to say things are looking difficult,” he said. “We hope that our EU friends will see sense and come to the table with something themselves, because that’s really where we are.”

Barnier has complained that the UK believes it is owed a concession on fishing access having accepted the need for an “evolution clause” on EU and UK standards in the treaty. “That is not how it works,” he has said.

The evolution clause opens up the possibility of the unilateral application of tariffs in the event of a divergence on environmental, labour or social standards putting one side at a competitive disadvantage.

A UK government source said a no-deal outcome remained the most likely. “Negotiations continue, but we remain far apart. We will leave no stone unturned, but given where things stand it feels more likely that we will leave the transition period on Australian terms,” the source said. - Guardian