Brexit: State braced for sharp rise in checks on food from Britain 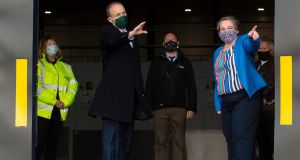 There would be a 30-fold increase in the number of veterinary and food safety checks required at Dublin Port from January if the current volume of goods arrived from Britain after the Brexit transition period ends at the turn of the year.

The Department of Agriculture has built border control infrastructure and hired 200 more inspectors for the checks required on British goods from January 1st based on checks rising from 3,500 a year currently to more than 100,000 after the UK leaves the EU single market.

Hazel Sheridan, head of the department’s import control division, which oversees the checks, expects smaller volumes of live animals, plant and plant products, and animal-based food products to pass through Irish ports as a result of the food health, sanitary and phytosanitary checks being applied to UK goods for the first time in a quarter of a century after Brexit takes effect.

“We don’t expect trade to remain the same, that the requirement for checks will have impacts that will lead to changes and re-engineering of business models,” Ms Sheridan said. “We will just have to see what effect that has over the course of the year.”

The food sanitation, plant and animal produce checks are just some of the new border controls that businesses will face on importing goods from Britain after they become subject to checks against the EU’s single market rules.

State officials expect the additional cost and time from the complexity of filing health certificates for every food product on multiple loads arriving from the UK will result in fewer goods passing through Dublin Port that will be subject to the checks.

“It is likely that trade will change and probably we would expect it to be somewhat less than it is today because at the moment quite small consignments can travel quite easily, but whether it will be economical to do that in the future, time will tell,” Ms Sheridan said.

The department will only know the full extent of the checks required when they become subject to controls as the volume of this trade with the UK has never been measured exactly before.

An analysis was carried out by the department on 408,000 “roll-on, roll-off” lorry consignments off ferries arriving into Dublin Port and found that the loads on 41 per cent or almost 170,000 were potentially of interest to inspectors checking for plant, animal health and food standards.

The UK’s departure from EU single market rules mean “significant changes” for Irish businesses that trade with Britain, she said.

“Unfortunately, that is a very tough adjustment for businesses to make but made it will have to be – there is just no way around it,” she said.

In early December, Dublin Port Company chief executive Eamonn O’Reilly called on State agencies to provide key performance indicators on post-Brexit checking to be able to assess whether the new controls would lead to congestion at the port and delays in ferry schedules.

Ms Sheridan said Brexit would “mean that getting through the ports will take much longer” but the extent of the delays will not be known until the trailers from Britain start being checked.

“We will only know that when we start to run the business and we see the magnitude of trucks that come through and see how well prepared people are,” she said.

Even though Dublin Port has called on shipping companies to stagger ferry arrivals from Britain to ease pressure on checks and avoid the port being congested by traffic, Ms Sheridan said the department has planned “based on how the ferries arrive today”.

The department is encouraging businesses to have the correct documents submitted in advance of shipping goods given that 67 per cent of third-country cargo is rejected because of problems with documentation.

Businesses face documentary, identification and possibly physical checks on goods, which could delay the passage of goods through ports and airports.

“In January it is not going to be as smooth as it will be in June or December next year when people will start to get used to things and what needs to be done,” she said.

“At all times we will be seeking to keep the checks to a minimum and we will be absolutely focused on keeping trade moving.”

The State has border control posts at Dublin Port, Dublin Airport and Shannon Airport and has built a new post at Rosslare Europort for product checks on EU single market rules.

The number of inspectors has been increased to 262 staff, with 210 at Dublin Port, the State’s busiest port, through which most of the goods requiring the SPS and health checks will pass.

Ms Sheridan said the volume of sanitation and health checks in the State to protect the EU from incoming diseases, pests and contaminants was unprecedented across the EU given the volume of food, plants and live animals currently crossing the EU-UK border between Ireland and Britain.