Brexit: EU and UK relations nosedive amid fallout from Bill that breaks law 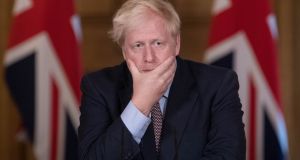 Relations between the EU and UK plunged to their worst level since the Brexit vote in 2016 on Wednesday when the British government published intended legislation which will violate the withdrawal treaty signed by the two sides last year, throwing the future of trade talks into doubt.

There were emergency contacts between EU leaders amid the development, while Taoiseach Micheál Martin expressed the Irish Government’s concerns in a “forthright” telephone call with British prime minister Boris Johnson on Wednesday night.

Minister for Foreign Affairs Simon Coveney said that the British government “has decided to cause chaos”.

The legislation, the UK Internal Market Bill, gives British ministers the power to decide unilaterally how parts of the Northern Ireland protocol in the withdrawal agreement should be implemented and disapplies parts of the treaty.

Mr Martin discussed the British move with president of the European Commission Ursula von der Leyen twice on Wednesday. A number of EU leaders, including Mr Martin and German chancellor Angela Merkel, had discussed the worsening situation in a call earlier this week.

Mr Martin is understood to have expressed his deep concerns to Mr Johnson about the effect of raising new uncertainty about Border issues in relation to Northern Ireland. Mr Johnson indicated that the British side would engage with the joint EU-UK committee on the implementation of the withdrawal agreement.

The British move has caused shockwaves around Europe. Dr von der Leyen responded by reminding Britain of the concept of “pacta sunt servanda”, or “agreements must be kept”, a founding principle of international relations and law.

Maros Sefcovic, a European Commission vice-president who co-chairs the EU-UK joint committee on the implementation of the withdrawal agreement, said he had expressed the EU’s “strong concerns” to his British counterpart, cabinet minister Michael Gove, in a phone call, and sought a meeting with Mr Gove.

EU and UK negotiators have just weeks to agree a complex further deal to govern their future relationship, covering everything from fishing rights to trade in goods and services.

At Westminster, Mr Johnson defended his decision to introduce a Bill that would break international law, telling MPs it is necessary to protect Britain against “extreme or irrational interpretations” of the Northern Ireland protocol.

Mr Johnson also told MPs during prime minister’s questions that the Bill was designed to protect peace in Northern Ireland.

Later, John Major became the second former Conservative prime minister to warn the government about the consequences of its move, after Theresa May did so before the Bill was published.

“For generations, Britain’s word – solemnly given – has been accepted by friend and foe . . . If we lose our reputation for honouring the promises we make, we will have lost something beyond price that may never be regained,” he said.

And in an unprecedented intervention, the Lord Chief Justice of Northern Ireland, Sir Declan Morgan, said the British government’s action could “undermine trust in the system of the administration of justice”.

Mr Justice Morgan told the BBC that the stance of the British government made him “gravely uncomfortable”.

“It enables others to take the view that they can choose which laws apply to them,” he said.

In the US, House speaker Nancy Pelosi also weighed in on Wednesday night.

“If the UK violates that international treaty and Brexit undermines the Good Friday accord [Belfast Agreement], there will be absolutely no chance of a US-UK trade agreement passing the Congress, ” she warned. “The Good Friday Agreement is treasured by the American people and will be proudly defended in the United States Congress.”