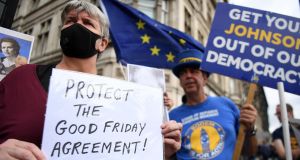 Pro-EU protesters demonstrate outside the houses of parliament in London on Wednesday. Photograph: Andy Rain/EPA

The UK government has said its Internal Market Bill breaks international law in “a specific and limited way”, but one EU law expert said it “absolutely and explicitly” damages the UK’s Brexit withdrawal treaty with the EU in a significant way.

“It is limited to two provisions of the Northern Ireland protocol but it is not limited in that it drives a coach and horses through the protocol,” said Catherine Barnard, professor of EU law at Trinity College, Cambridge.

Here are four ways in which the Bill breaches the withdrawal agreement.

The clearest example of how the UK’s domestic legislation rides roughshod over the EU-UK withdrawal agreement, signed less than a year ago, is in the area of state subsidies to industry.

Under the Northern Ireland protocol – the section of the Brexit withdrawal agreement designed to avoid a hard border on the island of Ireland – the UK government must notify the European Commission if it intends to offer any state aid where it affects businesses in Northern Ireland.

The Internal Market Bill, under section 43, gives the Northern Ireland secretary the right to disapply or modify article 10 of the protocol that covers the rules around state aid. This supports the view of Brexiteers who see the rules on state aid as encroaching on the UK’s sovereignty.

The Bill breaches the withdrawal agreement by saying that the Northern Ireland secretary could decide that article 10 will “not be interpreted in accordance with case law of the European court” or “in accordance with any legislative act of the EU”. This prevents a party taking an action to the European Court of Justice if they believe there has been an illegal state subsidy.

The Bill also deprives individuals of their ability to challenge a decision by the UK, which violates not just the protocol but article four of the EU-UK withdrawal agreement.

Section 42 of the UK Bill gives a UK government minister the power to disapply or modify the rules in the protocol so Northern Ireland businesses do not have to fill out export declarations or comply with other exit procedures. This supports the Brexiteer desire to allow Northern Irish goods “enjoy unfettered access to the rest of the United Kingdom” and fulfils the promise of UK prime minister Boris Johnson that there would no checks on goods crossing the Irish Sea.

The unlawful being lawful

Prof Barnard described section 45 of the Bill as being an “important wash-up clause” that protects the UK against the breaches in sections 42 and 43 by saying that there is nothing in them that could be regarded as unlawful by being incompatible or inconsistent with relevant international and domestic law. This protects the UK government’s Bill from judicial review.