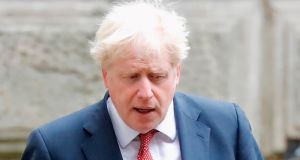 Sections of the internal market bill are expected to ‘eliminate the legal force of parts of the withdrawal agreement’ in areas including state aid and Northern Ireland customs. Photograph: Tolga Akmen/AFP via Getty

Government sources on Sunday night called for calm, but suspected gamesmanship could be behind reports that Boris Johnson’s government could press ahead with legislation to undermine Brexit trade negotiations.

The Financial Times reported on Sunday night that the UK was considering using sections of legislation due to be published on Wednesday to “eliminate the legal force of parts of the withdrawal agreement,” including those involving state aid and Northern Ireland customs.

That would undermine the agreement on Northern Ireland that the prime minister signed last October.

A senior Irish Government source cautioned that a knee-jerk reaction should be avoided. The EU’s Brexit task force will seek clarification on the story, which the source said was the most appropriate forum.

A second Government source speculated that the story could be a negotiation tactic. The source emphasised that the withdrawal agreement between Brussels and London is legally binding, and that Britain’s word would be worthless if it breached the agreement.

Minister for Foreign Affairs Simon Coveney tweeted, referring to the story, that it would be “a very unwise way to proceed”.

In a statement on Sunday night, Mr Johnson said that there needed to be a trade agreement by the European Council on October 15th if it was going to be in place by the end of the year. “So there is no sense in thinking about timelines that go beyond that point. If we can’t agree by then, then I do not see that there will be a free trade agreement between us, and we should both accept that and move on.”

He said the UK would then have a trade arrangement “like Australia’s” with the EU. “I have said from the start that would be a good outcome for the UK.”

He said under such a deal the UK would have full control over laws, rules and fishing waters and to strike trade deals with every country in the world “and we will prosper mightily as a result”. He said there is “still an agreement to be had . . . but we cannot and will not compromise on the fundamentals of what it means to be an independent country to get it.”

Fine Gael TD for Dublin Rathdown Neale Richmond, who chaired the Seanad Brexit committee during the last Government’s administration, said the reports, if true, “would be an extremely worrying and unwise path for the British Government to take”.

“The Withdrawal Agreement is an International Treaty with obligations to International law. It cannot simply be overridden with domestic legislation.”

The Financial Times reported that the UK is planning new legislation that will override key parts of the Brexit withdrawal agreement, risking the collapse of trade negotiations with Brussels.

Sections of the internal market bill - due to be published this Wednesday - are expected to “eliminate the legal force of parts of the withdrawal agreement” in areas including state aid and Northern Ireland customs, according to three people familiar with the plans.

The move would “clearly and consciously” undermine the agreement on Northern Ireland that Boris Johnson signed last October to avoid a return to a hard border in the region, one person with knowledge of the plans said.

Last week, the EU’s chief negotiator Michel Barnier warned that “a precise implementation of the withdrawal agreement” was vital for the success of trade talks and a key issue of trust between the two parties.

“It is a very blunt instrument,” said one of those familiar with the matter. “The bill will explicitly say the government reserves the right to set its own regime, directly setting up UK law in opposition with obligations under the withdrawal agreement, and in full cognisance that this will breach international law.”

The UK internal market bill, outlined in a 100-page white paper in July, is designed to secure the “seamless functioning” of trade between England, Wales, Scotland and Northern Ireland after the UK leaves the EU’s single market and customs union at the end of this year.

But some clauses in the bill will effectively override parts of the so-called Northern Ireland protocol, which was signed alongside the withdrawal agreement in October and has enraged prominent Brexit-supporting MPs who see it as a threat to British sovereignty.

Under the withdrawal agreement, the UK must notify Brussels of any state aid decisions that would affect Northern Ireland’s goods market, and compel businesses in the province to file customs paperwork when sending goods into the rest of the UK. But clauses in the internal market and finance bills will force the UK courts to follow the new UK law rather than the EU deal, diluting the ability of the protocol to intrude on UK state aid policy.

The autumn finance bill, used to write the chancellor’s Budget into law, is also expected to overwrite a third aspect of the Northern Ireland protocol covering the payment of tariffs on goods entering the region, according to those familiar with the plans.

Officials say the plans risk poisoning the prospects of an eleventh-hour deal.

Lord Frost, the UK chief negotiator, has already deepened tensions ahead of negotiations that are due to resume in London on Tuesday, saying in a Sunday newspaper interview that the UK would not become a “client state” of the EU.

A second person familiar with the impending bill said that Lord Frost had personally driven the decision to take the “nuclear option” of overwriting the withdrawal agreement, despite progress being made in talks on implementing the Irish protocol.

Christophe Hansen, the European Parliament’s lead MEP for the adoption of the future trade agreement, told the Financial Times that the full respect of the withdrawal agreement was a core “trust” issue and a “litmus test” of the UK’s willingness to honour deals with Brussels.

“It is very important for us to see that it is put in place,” he said, warning that otherwise, the EU could not be confident that Britain would respect any future-partnership arrangement. – Additional reporting copyright The Financial Times Limited 2020