President has had a tough first month in office, and faces more challenges ahead 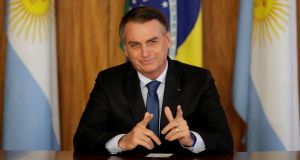 Brazil’s president Jair Bolsonaro: the former army captain is learning that shooting from the hip can call down problems on his nascent administration. Photograph: Ueslei Marcelino/Reuters

Though he was sworn in on January 1st, the real business of governing Brazil starts on Friday for president Jair Bolsonaro with the opening of the new congress through which his ambitious reform programme must pass.

The former army captain is currently absent from his capital and will have to follow events in Brasília from his hospital bed in São Paulo, where he is recovering from a third major operation following his stabbing at a campaign rally last year that almost cost him his life.

His delicate medical condition might provide some of the explanation, but it has been a difficult first month for Bolsonaro and his team.

Last week’s mining disaster in Brumadinho, with 99 people confirmed dead and more than 250 still missing, provided Brazilians with a stark reminder of the need for the sort of environmental regulations that as a candidate Bolsonaro had promised to weaken.

As a fringe backbencher in congress for 30 years, he was used to firing off controversial statements that did little more than stir up media storms in a cup. But he is now learning that, as president, metaphorically shooting from the hip can call down problems for his nascent administration.

Ministers have already had to walk back several of his statements, resulting in questions being asked about his grasp of the big issues he must face. The most dramatic example was when he responded to a visit by Russian strategic bombers to Venezuela by suggesting Brazil would be open to providing the US with a military base on its territory to counterbalance any Russian presence in the region, an idea quickly shot down by the generals he has packed into his administration.

“His performance so far has not been bad but it has not been very good either,” says David Fleischer, professor of politics at the University of Brasília. But with the return of congress the political preliminaries are over and the real work begins in trying to pass legislation designed to restore economic growth and reform a dysfunctional and fiscally incontinent state.

If questions have been asked of Bolsonaro’s performance, there remains huge confidence in the team of his economic tsar Paulo Guedes, a Chicago-trained economist who has vowed to implement long-overdue structural reforms.

“This government has a lot to address but its perspectives for doing so are the best possible,” says Pablo Spyer, a director with Mirae Asset Wealth Management in São Paulo. “The market trusts Paulo Guedes and his team. They have a plan to change the country and it will have a positive impact on the economy. This is why local markets keep setting one new high after another.”

The main test of this confidence will be the government’s ability to reform Brazil’s ruinous pension system, which is at the heart of the fiscal deficit that investors say needs tackling before the public debt burden spirals out of control.

Bolsonaro’s predecessor, Michel Temer, confidently tabled a pension reform on assuming office in 2016. But the plan was eventually shelved after he became consumed in a corruption scandal.

That sets a worrying precedent in light of the scandal around Bolsonaro’s son Flávio, caught up in an investigation into corruption at Rio de Janeiro’s state assembly, where he served before being elected senator last year.

Flávio has been unable to convincingly explain the origin of millions of reais that flowed through his bank account and that of one of his aides in the Rio assembly. It is a damaging affair for a family that made huge political capital with its promise to cleanse Brazil’s endemically corrupt political culture. It also risks undermining Bolsonaro’s leverage with congress for arm-wrestling it into approving unpopular reforms if Flávio’s dubious financial arrangement begin to dent his own popularity with the wider public.

“The scandal is going from bad to worse almost every day. It could be damaging. Flávio is a very negative part of Bolsonaro’s brand and his affairs are spilling over into his government,” notes Prof Fleischer. This damage caused by Flávio and Bolsonaro’s own missteps will be likely overlooked if Guedes manages to get an ambitious pension reform through the new congress. Real reform could unleash a wave of new investment into the economy and would set the administration fair to implement the rest of its far-right agenda.

But given congress has often proven the graveyard of meaningful structural reforms in the past, the new administration will have to move fast before doubts begin to emerge about its ability to deliver.

“By the end of June the market will want to see a plan for pension reform on the table and by August evidence the administration has enough votes to get it through congress,” warns Mirae’s Pablo Spyer.

“Or else people will begin to become nervous.”