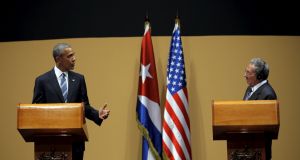 US president Barack Obama and Cuban president Raul Castro: Mr Obama said the list of the things the White House could do to ease restrictions outside of ending the embargo was “growing shorter.” Photograph: Carlos Barria/Reuters

s a “new day” in diplomatic relations but he has clashed with President Raul Castro on democracy and human rights.

Their differences showed the deep chasm still between two nations cautiously edging closer after more than a half century of tensions.

One area of mutual agreement between the two leaders came when they called for an end to the 54-year US embargo of Cuba at their joint press conference at Havana’s Revolution Palace following the first official meeting between the two governments in decades.

“The embargo’s going to end,” Mr Obama told reporters on the first visit by a sitting US president to Cuba since Calvin Coolidge in 1928. “When, I can’t be entirely sure, but I believe it will end.”

Mr Castro (84), in forceful remarks, said relations between the countries would never be normal until the US returned the “illegally occupied” Guantánamo Bay where it has a naval base and end the embargo.

“Much more can be done if the embargo is lifted,” he said. “We recognise the position President Obama is in, and the position his government holds against the blockade” – the Cuban term for the embargo – “and that they have called on Congress to lift.”

He praised Mr Obama’s steps to lift the economic restrictions as “positive but insufficient” and described the embargo as “the most important obstacle” to the well-being of the Cuban people.

Mr Obama said the list of the things the White House could do to ease restrictions outside of ending the embargo was “growing shorter.”

Relations between their governments, restored in December 2014 after more than a half century of cold war tension and isolation of Cuba, would “not be transformed overnight”.

The two leaders “continue to have some very serious differences including on democracy and human rights,” he said, and that they have had “very frank and candid conversations on these subjects”.

Mr Castro, for his part, said there were “profound differences between our countries that will not go away.” He decried “political manipulation and double standards” in American criticism of Cuba’s human rights record, saying that it was “inconceivable” for a government not to defend a right to education, healthcare, social security, food, equal pay and children’s rights.

The US and Cuban presidents took questions from reporters, a rare opening to the press by the Cuban leader, although he became vexed when the media exceeded the one question he had promised to answer.

The younger brother of Fidel Castro, the revolutionary leader who seized power in 1959, grew irritable in response to a question from CNN reporter Jim Acosta, the son of Cuban immigrants, about the release of political prisoners in Cuban prisons.

When one final question was put to him, a cantankerous Castro rounded again on the criticism of Cuba’s record on human rights and ended the press conference abruptly with: “I think this is enough.”