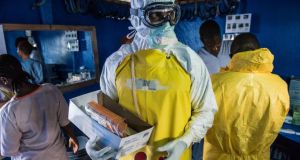 Australia has imposed a visa ban on countries affected by Ebola while the US military has started isolating soldiers returning from a response mission in West Africa.

The latest measures, along with decisions by some US states to impose mandatory quarantines on health workers returning home from treating Ebola victims in west Africa, have been condemned by health authorities and the United Nations as extreme.

The top health official in charge of dealing with Washington’s response to Ebola warned against turning doctors and nurses who travel to west Africa to tackle Ebola into “pariahs”.

The Ebola outbreak has killed nearly 5,000 people since March, the vast majority in West Africa, but nine Ebola cases in the United States have caused alarm, and states such as New York and New Jersey have ignored federal advice by introducing their own strict controls.

The United Nations yesterday sharply criticized the new restrictions imposed by some US states on health workers returning home from the affected West African states of Liberia, Guinea and Sierra Leone.

“Returning health workers are exceptional people who are giving of themselves for humanity,” secretary-general Ban Ki-moon’s spokesman, Stephane Dujarric, said. “They should not be subjected to restrictions that are not based on science. Those who develop infections should be supported, not stigmatized.”

American soldiers returning from West Africa are also being isolated, even though they showed no symptoms of infection and were not believed to have been exposed to the deadly virus, officials said yesterday.

In a statement, the army said chief of staff general Raymond Odierno ordered the 21-day monitoring period for returning soldiers “to ensure soldiers, family members and their surrounding communities are confident that we are taking all steps necessary to protect their health.”

The army isolated about a dozen soldiers on their return during the weekend to their home base in Vicenza, Italy.

That included major general Darryl Williams, the commander of US army Africa, who oversaw the military’s initial response to the Ebola outbreak in West Africa.

“We are billeted in a separate area (on the base). There’s no contact with the general population or with family. No one will be walking around Vicenza,” Mr Williams said in a telephone interview.

The US military has repeatedly stressed that its personnel are not interacting with Ebola patients and are instead building treatment units to help health authorities battle the epidemic.

“From a public health perspective, we would not feel that isolation is appropriate,” said Dr Jeff Duchin, Washington State epidemiologist and chairman of the public health committee of the Infectious Diseases Society of America.

The decision goes well beyond previously established military protocols and came just as president Barack Obama’s administration sought to discourage precautionary quarantines being imposed by some US states on healthcare workers returning from countries battling Ebola.

Dr Thomas Frieden, director of the US Centers for Disease Control and Prevention (CDC), called for isolation of people at the highest risk for Ebola infection but said most medical workers returning from the three countries at the centre of the epidemic would require daily monitoring without isolation.

The Obama administration’s new guidelines are not mandatory, and states will have the right to put in place policies that are more strict.

Some state officials, grappling with an unfamiliar public health threat, had called federal restrictions placed on people travelling from Ebola-affected countries insufficient to protect Americans and have imposed tougher measures.

Australia yesterday issued a blanket ban on visas from Ebola-affected countries in West Africa to prevent the disease reaching the country, becoming the first rich nation to shut its doors to the region.

Australia has not recorded a case of Ebola despite a number of scares, and conservative prime minister Tony Abbott has so far resisted repeated requests to send medical personnel to help battle the outbreak on the ground.

The decision to refuse entry for anyone from Sierra Leone, Guinea and Liberia, while touted by the government as a necessary safety precaution, was criticised by experts and advocates as politically motivated and short-sighted.

Adam Kamradt-Scott, a senior lecturer at the University of Sydney’s Marie Bashir Institute for Infectious Diseases and Biosecurity, said the ban would do nothing to protect the country from Ebola while potentially having a negative public health impact by unduly raising fears and creating a general climate of panic.

Medical professionals say Ebola is difficult to catch and is spread through direct contact with bodily fluids from an infected person and not transmitted by asymptomatic people. Ebola is not airborne.

There has been a growing chorus of critics, including public health experts, the United Nations, medical charities and even the White House, denouncing mandatory quarantines as scientifically unjustified and an obstacle to fighting the disease at its source in West Africa.

“Anything that will dissuade foreign trained personnel from coming here to West Africa and joining us on the frontline to fight the fight would be very, very unfortunate,” Anthony Banbury, head of the UN Ebola Emergency Response Mission (UNMEER), said in the Ghanian capital Accra.

He said health workers returning to their own countries should be treated as heroes.