Wreckage and bodies from AirAsia plane located in sea 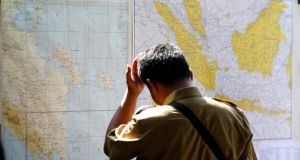 A man looks at a map with the search area, in the Java Sea, for the missing AirAsia plane at Juanda Airport, Indonesia. Photograph: Made Nagi/EPA 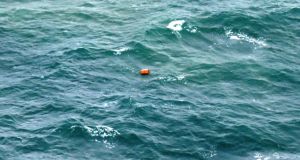 An unidentified object is seen floating in the ocean off the coast of Pangkalan Bun, Borneo in Indonesia on Tuesday. Photograph: Kenarel/EPA 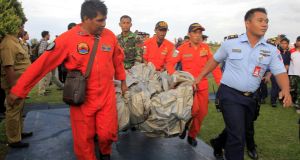 Members of an Indonesian Air Force crew carry what is believed to be an emergency slide from the AirAsia plane which was recovered during the search and rescue operation. Photograph: Bagus Indahono/EPA

Indonesian search and rescue officers said they had found an Air Asia flight which went missing on Sunday with 162 people on board, and began pulling scores of bodies and debris from the Java Sea.

The bodies and wreckage were located in the Java Sea, off Indonesia’s Kalimantan Coast on Borneo Island, around 10 kilometres from where Flight QZ8501 made its last communication with air traffic control.

About 40 bodies spotted from a helicopter in Pangkalan Bun have been taken to an Indonesian navy ship.

Pictures of floating bodies were broadcast on television and relatives of the missing gathered at the crisis centre in Surabaya were shown weeping, their heads in their hands.

Indonesia’s director-general of civil aviation, Djoko Murjatmodjo, said “for the time being, it can be confirmed that it’s the AirAsia plane”.

The debris are at a depth of up to 30 metres, which will make it possible for scuba divers to reach the wreckage.

Meanwhile, the head of the search and rescue mission, Sulistyo told a news conference: “We are now officially announcing that on the third day of the search, we found the debris.”

Indonesian TV showed a searcher being lowered on a winch from a helicopter to where a bloated body floated on the waves.

We are deeply saddened by the news of QZ8501. Heartfelt condolences to loved ones of those affected #togetherwestand pic.twitter.com/gFHpYAJpAq

About 40 minutes after leaving Surabaya en route to Singapore, the Airbus A320-200 disappeared from the radar screens, shortly after it was denied permission to fly from 32,000 feet to 38,000 feet to avoid clouds.

Relatives gathered in Surabaya became hysterical, wailing as they watched the grisly sight at the crisis centre in the city, where many families have gathered during the search. One man passed out, others grabbed each other.

The search and rescue mission had swollen to about 30 ships and 21 aircraft from Indonesia, Australia, Malaysia, Singapore, South Korea and the United States.

There were 155 Indonesians on the flight, three South Koreans and one person each from Singapore, Malaysia and Britain. The co-pilot was French.

The missing Airbus belongs to the Indonesian unit of regional budget carrier AirAsia, based in Malaysia. The disappearance of flight QZ8501 is the third devastating tragedy to strike a Malaysia-affiliated flight in less than a year. Malaysian Airlines Flight MH370 disappeared in March between Kuala Lumpur and Beijing with 239 passengers and crew and has not been found, while in July, Malaysian Airlines Flight MH17 was shot down over Ukraine, killing all 298 people on board.

Aviation officials said they were also bringing in a device that can detect underwater signals from the aircraft’s black boxes.

The tragedy caps an appalling year for Southeast Asian aviation after three Malaysia-based aircraft have gone down without any survivors in less than a year.

There have been concerns about the manner in which Malaysia handled the investigation into the disappearance of the two Malaysian Airlines’ flights, and how the Air Asia disaster is handled will have serious repercussions

According to the Jakarta Globe, at least three pilots on the Indonesian budget airline Lion Air have been arrested for the possession or use of the stimulant metamphetamine, or crystal meth.

Air Asia is modelled in many ways on Ryanair, and it has allowed middle-class people in the region the option of being able to take to the skies for the first time and opened up major tourism opportunities in the region.

The airline had an exemplary safety record since its foundation in 2002, and had never had a fatal crash.

Its tycoon owner Tony Fernandes is the host of the Asian version of The Apprentice” and is a popular role model in the region.

His handling of the tragedy has been proactive and sympathetic, calling it “his worst nightmare” and heading straight to Surabaya to offer a public face to his company in the situation.

After the wreckage was found, Fernandes tweeted: “My heart is filled with sadness for all the families involved in QZ 8501. On behalf of AirAsia my condolences to all. Words cannot express how sorry I am.”

Meanwhile, another AirAsia plane has been involved in a landing in which passengers had to disembark via the emergency slides after an apparent over-shooting of the runway in bad weather at Kalibo on Panay Island in the Philippines. One passenger, Jet Damazo-Santos, tweeted: “Just landed in Kalibo on an AirAsia flight that overshot runway. Had to deplane using emergency slide. “Nobody seems to be hurt. Weather was bad. Plane came to a very abrupt stop.”