Self-taught tactician drove French and American forces out of Vietnam 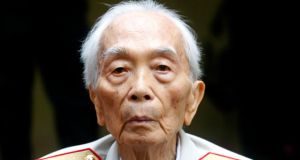 Vietnamese General Vo Nguyen Giap is seen at a residence in Hanoi in August 2008. General Vo Nguyen Giap, architect of Vietnam’s military victories over France and the United States, died today, of natural causes, family members and a hospital source said. He was 102. Photograph: Kham/Files/Reuters 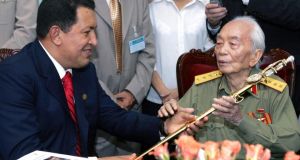 Venezuela’s then president Hugo Chavez (left) offers a sword, similar to the one used by Venezuela’s hero Simon Bolivar, to Vietnam’s General Vo Nguyen Giap at his home in Hanoi in 2006. Photograph: Hoang Dinh Nam/Pool/Files 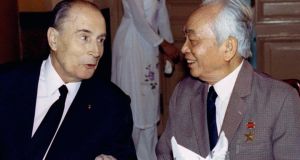 Vo Nguyen Giap, the brilliant and ruthless self-taught general who drove the French out of Vietnam to free it from colonial rule and later forced the Americans to abandon their effort to save the country from communism, has died.

At the age of 102, he was the last of Vietnam’s old-guard revolutionaries.

Giap died today in a military hospital in the capital of Hanoi where he had spent close to four years being treated for illness, officials said.

Gen Giap was a national hero whose legacy was second only to that of his mentor, founding president Ho Chi Minh, who led the country to independence.

The so-called “red Napoleon” stood out as the leader of a ragtag army of guerrillas who wore sandals made of car tyres and lugged their artillery piece by piece over mountains to encircle and crush the French army at Dien Bien Phu in 1954. The unlikely victory, which is still studied at military schools, led not only to Vietnam’s independence but hastened the collapse of colonialism across Indochina and beyond.

Gen Giap went on to defeat the US-backed South Vietnam government in April 1975, reuniting a country that had been split into communist and non-communist states. He regularly accepted heavy combat losses to achieve his goals.

“No other wars for national liberation were as fierce or caused as many losses as this war,” Gen Giap said in 2005 in one of his last known interviews with foreign media on the eve of the 30th anniversary of the fall of Saigon, the former South Vietnamese capital.

“But we still fought because for Vietnam, nothing is more precious than independence and freedom,” he said, repeating a famous quote by Ho Chi Minh.

Gen Giap remained sharp and well-versed in politics and current events until he was taken to hospital. Well into his 90s, he entertained world leaders, who posed for photographs and received autographed copies of his books while visiting the general’s shady colonial-style home in Hanoi.

Although he was widely revered in Vietnam, Gen Giap was the nemesis of millions of South Vietnamese who fought alongside US troops and fled their homeland after the war, including the many staunchly anti-communist refugees who settled in the United States.

Born on August 25, 1911, in central Vietnam’s Quang Binh province, Giap became active in politics in the 1920s and worked as a journalist before joining the Indochinese Communist Party. He was jailed briefly in 1930 for leading anti-French protests and later earned a law degree from Hanoi University.

He fled French police in 1940 and met Ho Chi Minh in southwestern China before returning to rural northern Vietnam to recruit guerrillas for the Viet Minh, a forerunner to the southern insurgency later known as the Viet Cong.

During his time abroad, his wife was arrested by the French and died in prison. He later remarried and had five children.

In 1944, Ho Chi Minh called on Gen Giap to organise and lead guerrilla forces against Japanese invaders during the Second World War. After Japan surrendered to Allied forces the following year, the Viet Minh continued their fight for independence from France.

Gen Giap never received any formal military training, joking that he attended the military academy “of the bush.”

At Dien Bien Phu, his Viet Minh army surprised elite French forces by surrounding them. Digging miles of trenches, the Vietnamese dragged heavy artillery over steep mountains and slowly closed in during the bloody, 56-day battle that ended with French surrender on May 7th, 1954.

“If a nation is determined to stand up, it is very strong,” Gen Giap told foreign journalists in 2004 before the battle’s 50th anniversary. “We are very proud that Vietnam was the first colony that could stand up and gain independence on its own.”

It was the final act that led to French withdrawal and the Geneva Accords that partitioned Vietnam into north and south in 1956. It paved the way for war against Saigon and its US sponsors less than a decade later.

The general drew on his Dien Bien Phu experience to create the Ho Chi Minh Trail, a clandestine jungle network that snaked through neighbouring — and ostensibly neutral — Laos and Cambodia, to supply his troops fighting on southern battlefields.

Against American forces with their sophisticated weapons and B-52 bombers, Giap’s forces again prevailed. But more than a million of his troops perished in what is known in Vietnam as the “American War.”

“We had to use the small against the big; backward weapons to defeat modern weapons,” Giap said. “At the end, it was the human factor that determined the victory.”

Historian Stanley Karnow, who interviewed Giap in Hanoi in 1990, quoted him as saying: “We were not strong enough to drive out a half million American troops, but that wasn’t our aim. Our intention was to break the will of the American government to continue the war.”

Gen Giap had been largely credited with devising the 1968 Tet Offensive, a series of surprise attacks on American strongholds in the south by Viet Cong and North Vietnamese forces that came during lunar new year celebrations. Newer research, however, suggests that Gen Giap had been against the attacks, and his family has confirmed that he was out of the country when they began.

The Tet Offensive shook America’s confidence, fuelled anti-war sentiment and prompted US president Lyndon Johnson to announce that he would not seek re-election. But it took another seven years for the war to be won.

On April 30, 1975, communist forces marched through Saigon with tanks, bulldozing the gates of what was then known as Independence Palace.

“With the victory of April 30th, slaves became free men,” Gen Giap said. “It was an unbelievable story.”

It came at a price for all sides: the deaths of as many as 3 million communists and civilians, an estimated 250,000 South Vietnamese troops and 58,000 Americans.

Throughout most of the war years, Giap served as defence minister, armed forces commander and a senior member of Vietnam’s ruling Communist Party, but he was slowly elbowed from the centre of power after Ho Chi Minh’s death in 1969. The glory for victory in 1975 went not to Gen Giap, but to Gen. Van Tien Dung, chief of the general staff.

Gen Giap lost the defence portfolio in 1979 and was dropped from the all-powerful Politburo three years later. He stepped down from his last post, as deputy prime minister, in 1991.

He kept up with world news and offered a piece of advice in 2004 for Americans fighting in Iraq.

“Any forces that wish to impose their will on other nations will certainly face failure,” he told reporters.

Late in life, Gen Giap encouraged warmer relations between Vietnam and the United States, which re-established ties in 1995 and have become close trading partners. Vietnam has also recently looked to the US military as a way to balance China’s growing power in the disputed South China Sea.