Vietnam marks 40th anniversary of the end of war

As many as 3 million Vietnamese and 58,000 Americans lost their lives in the war 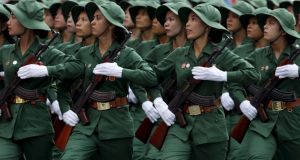 Vietnamese female soldiers of Liberation Force march during a military parade as part of the 40th anniversary of the fall of Saigon in Ho Chi Minh City. Photograph: Kham/Reuters 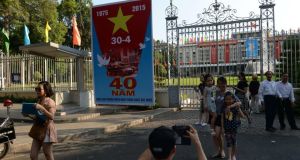 A family poses next to a poster marking the 40th anniversary of the fall of Saigon (now Ho Chi Minh City) placed at the front gates of the former presidential palace of the Southern Vietnamese regime in Ho Chi Minh Cit. Photograph: Hoang Oang Dinh Nam/AFP/Getty Images 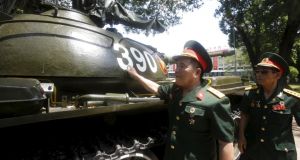 Tank 390’s first gunner Ngo Sy Nguyen (left) and second gunner Le Van Phuong stand next to their tank, which was operated by North Vietnamese forces and crashed through the gates of the Reunification Palace, formerly the Presidential Palace, 40 years ago. Photograph: Kham/Reuters

Ho Chi Minh City, formerly known as Saigon, was decked out in hammer-and-sickle banners as soldiers marched through the nation’s financial center, 40 years after communist fighters defeated US and South Vietnamese forces.

On April 30th, 1975 the US withdrew from a divisive and bloody war in which some 58,000 Americans were killed, along with up to 250,000 South Vietnamese allies and an estimated 3 million communist fighters and civilians.

At least 3 million Vietnamese were affected by Agent Orange the dioxin deployed by US military during the war and it has been estimated that at least 40,000 people have been killed since then with more than 60,000 injured by landmines and unexploded ordnance.

Marking the anniversary, thousands of Vietnamese, including war veterans in uniform, lined up to watch soldiers and traditional performers parade through the streets of what is now Ho Chi Minh City.

When North Vietnamese tanks rolled in the then the capital of South Vietnam was known as Saigon.

They crashed through the gates of the presidential palace and hoisted the communist flag. It was an incredible victory for the revolutionary forces that had waged guerrilla warfare against the powerful, better equipped United States.

“The tank crashing the gates ... was a symbol of victory for the Vietnamese nation and the Vietnamese People’s Army, marking the end of the 30 years of national resistance against the French and then the Americans,” said Nguyen Van Tap (64) who drove Tank 390 through the iron bars and reunited with members of his tank company.

“For the Vietnamese, April 30th is a day of festivities and national reunification.”

For the US and its South Vietnamese allies, the day was one of panic, chaos and defeat known simply as the fall of Saigon.

After the government’s parade and celebratory speeches were over today, a group of former US Marines who helped Americans evacuate Saigon as it fell planned to gather at the site of the old US Embassy, now the US Consulate.

They were dedicating a plaque to the two fallen comrades who were last two US servicemen killed in the war — Cpl Charles McMahon and Lance Cpl Darwin Judge died on April 29th, 1975, when their post near the airport was hit by a rocket.

“We lost ... and I felt that way for a long time,” said Kevin Maloney, one of the last Marines out.

“I was ashamed that we left people behind like that. I did what I could, so I’m satisfied with my own performance, but as a nation, I think we could have done better. And I hope we can learn from that, but I don’t think we’ve seen that.”

Hundreds of thousands of Vietnamese fled the south in the days and years following the war, with many taking fragile boats in search of freedom.

From the Archive: How The Irish Times reported the fall of Saigon

The majority ended up resettling in the US. Many have since come home to visit family and to invest in the country, but some have remained feverishly anti-communist and have refused to return as long as the one-party government is in power.

Prime minister Nguyen Tan Dung in a speech recalled the “glorious chapter” in the victory against “US imperialists and its henchmen” in 1975, even as he said his government was “putting the past behind us and looking forward to the future.”

US ambassador Ted Osius is due to give a speech later Thursday at the US consulate where he will focus on the prospect for a warmer relationship. The comments underscore the complicated and evolving relationship between former enemies whose strategic interests are merging with the economic and military rise of China.

The Vietnam conflict became a Cold War-era proxy war with the Soviet Union backing the Communists in the North and the US sending more than 2 million soldiers to support the South during the course of the conflict.

“The government is aware that the past overshadows its relationship with the US,” Alexander Vuving, a security analyst at the Asia-Pacific Center for Security Studies in Hawaii, said by phone.

“They don’t want to forget about the past. But they want to look to the future and that resonates with the general population.”

Bilateral trade between the US and Vietnam soared to $36 billion last year from $451 million in 1995, according to the US Census Bureau. The countries are also cooperating more on the strategic front: The US is providing Vietnam with six patrol boats, part of an $18 million military aid package.

For many Vietnamese in the south, April 30th is a date fraught with mixed emotions, Mr Vuving said.

“From the Vietnamese perspective, it was always a war among Vietnamese,” he said. “You have both winners and losers in Vietnam.”

The country still tightly controls the press and cracks down on political dissidents. It jails those who dare to speak out for democracy, including in blogs on the Internet.

But much has changed since the early days after the war when Vietnam was plunged into severe poverty and isolation during failed collective farming policies.

The US normalised relations with Vietnam in 1995. More than 16,000 Vietnamese students now study in America, and the US has become one of Vietnam’s biggest foreign investors. Bilateral trade exceeded $36 billion US dollars (€32.4 billion) last year.

The two countries have also hosted high-level visits, and Vietnam has welcomed military co-operation and visiting US naval ships.

China continues to spar with Hanoi and other neighbours over disputed islands in the South China Sea in what is viewed as a growing maritime threat in the region.

Decades later, patriotic songs with lyrics such as “kill the enemy” are still played at official events. A special double-issue of Vietnam News on April 26th celebrated the defeat of “imperialistic forces” with a feature about a tank crew that swept into Saigon 40 years ago.

“It’s a reaffirmation of the party and the military and their guidance that led to Vietnam being independent,” Carlyle Thayer, an emeritus professor at the Australian Defence Force Academy in Canberra, said by phone.

“This is also a message to China: Vietnam defeated the most powerful country in the world and the people are united.”

The interests of the US and Vietnam became more aligned when China placed an oil rig in waters near the contested Paracel Islands last May, triggering clashes between boats and anti-Chinese riots in Vietnam, Le Hong Hiep, a lecturer at Vietnam National University in Ho Chi Minh City, said by phone.

“The two countries now are working to build stronger ties, especially after the oil rig incident,” he said. “I think China is watching closely.”

A 2014 Pew Research Center survey found Vietnamese have a 76 per cent favorable view of the US and a 16 per cent positive view of China. “There is a forgiveness,” said Louis Andre (68) who fought in Quang Tri province with the US Army Special Forces and is visiting Vietnam for the first time since the war.

“There are handshakes and warm hugs. If you want to have hope about the future, you have to stop wishing for a different past. That past is what it is.”

1 Coronavirus: Warning of similar measures for other counties as Donegal moves to Level 3
2 Aer Lingus staff say they are living in ‘near poverty’ and unable to cover rent
3 Australian man found guilty of murdering Irishwoman Ciara Glennon in 1997
4 Séamus Woulfe: The last man standing in Golfgate is set to learn his fate
5 Covid-19 Q&A: How are we doing, is there any good news and what happens now?
Real news has value SUBSCRIBE