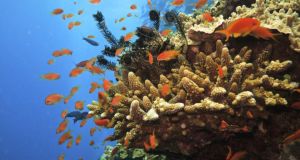 The Great Barrier Reef has the world’s largest collection of coral reefs, with 400 types of coral, 1,500 species of fish, 4,000 types of mollusc, and is a habitat for threatened species.

Australia said yesterday it had the know-how to protect the Great Barrier Reef after the UN’s cultural agency criticised a plan to dump sand nearby, but proposed postponing any move to place the reef on an “in danger” list.

Australia’s agency in charge of protecting the Great Barrier Reef granted a permit in January for 3 million cubic metres of soil dredged to expand the port of Abbot Point for new coal projects to be dumped about 25km (15 miles) from the reef.

Unesco’s World Heritage Committee, in a report issued at its Paris headquarters on Wednesday, said member states meeting in Qatar in June should not consider until 2015 whether to put the reef on the list.

The recommendation gives Australia a one-year reprieve from a potentially embarrassing blow, as the committee had earlier said member states should consider placing the World Heritage-listed reef on the danger list at the June meeting.

“We are confident that we have the processes, resources and environmental protection mechanisms in place to ensure that the Great Barrier Reef continues to be among the best managed and protected World Heritage areas in the world,” Mr Hunt added.

Threatened species
The reef has the world’s largest collection of coral reefs, with 400 types of coral, 1,500 species of fish, 4,000 types of mollusc, and is habitat for threatened species, including the dugong and large green turtle, according to the World Heritage list.

The Unesco committee regretted approval for the dredging project “prior to having undertaken a comprehensive assessment of alternative and potentially less impacting development and disposal options”.

Australia, the committee said, should be asked “to ensure that the option selected...is the least damaging option available”.

The North Queensland Conservation Council, which has mounted the legal challenge to the approval, said it was not confident Australia would do enough to prevent the “in danger” listing.

‘Sword of Damocles’
“I’m sad that more has not been done by the Australian and Queensland governments so that this threat is still hanging over us like the Sword of Damocles,” said Wendy Tubman, the council’s coordinator.

The Australian Marine Conservation Society said authorities had six months to “turn around a situation when they’re simply not doing enough to reverse the health decline of the reef”.

Alternatives
The port operator said Unesco had failed to recognise that alternatives for expanding the port had been considered.