Eyewitness video showed hundreds of protesters being detained by Myanmar police in Yangon on Wednesday, March 3rd, the bloodiest day of the country's demonstrations since the February 1st coup. Video: Reuters 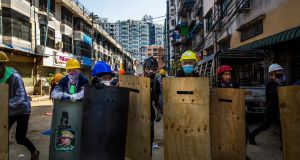 Protesters gather behind shields in case of a crackdown by security forces in Yangon, Myanmar. Photograph: The New York Times

The Security Council in New York was convened on Friday, amid growing international alarm about the military junta’s forceful tactics towards people protesting the February 1st military coup.

Christine Schraner Burgener appealed to the 15-member body – which includes Ireland – to take action, warning that the reputation of the UN was at stake.

Police in Myanmar again opened fire on demonstrators on Friday, killing at least one man. Wednesday was the bloodiest day so far, when 38 people were killed according to the United Nations.

The Council will continue to negotiate next week, but is grappling with different views within its membership, following the ousting of Aung San Suu Kyi and other political leaders by the military last month.

The Security Council issued a statement in February expressing concern over the state of emergency declared by the military, though there has been push back from Russia and China over calls to condemn the coup.

Speaking after Friday’s meeting, Ireland’s Ambassador to the United Nations Geraldine Byrne Nason said that Ireland had called on the Security Council “to meet its responsibilities and send a united message that we stand with the people of Myanmar”.

“We also called for the release of detained political leaders and all of the peaceful protesters arrested as they defend their democracy in the streets of Myanmar,” she said. “The humanitarian impact of this crisis is foremost in our minds.”

America, which holds the presidency of the council in March, accused the military of trying to “silence” the protesters with internet blackouts, adding that it continued to “stand firm” with the people of Myanmar.

YouTube, which is owned by Google’s parent company, removed five channels run by the military Friday, stating that they breached community guidelines and law.

Protesters have continued to take to the streets despite the violent crackdown, many capturing the brutality of police on smartphones.

America’s UN ambassador Linda Thomas-Greenfield has said that the “world is watching” the situation in Myanmar, and that “we can’t sit still and watch people continue to be brutalised and their human right to be destroyed”.

But any move to introduce UN sanctions is likely to be vetoed by Russia or China.

The UN is also in the midst of a diplomatic row about the status of Myanmar’s ambassador to the international body. Kyaw Moe Tun was fired by the military rulers on Saturday, a day after he delivered an impassioned speech criticising the coup. But members, including the United States, said they continued to recognise him as ambassador.

Though the military junta named the deputy ambassador as a replacement, he subsequently resigned.

The European Union also condemned the violence in Myanmar Friday, noting the deaths of innocent civilians, medical workers and the crackdown on journalists.

“Such attempts to silence the media and eradicate freedom of expression will not prevent the world from witnessing the actions of the Myanmar military and the bravery of the Myanmar people, nor will they give any legitimacy to the coup.”